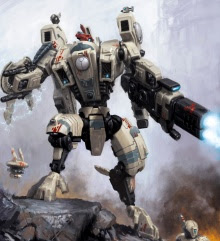 Sometimes in Tournaments things go wrong, and it is often our hope that these just dice, and not related to rules, or odd interpretations. An Acquaintance of mine apparently has run into one of these rules issues....and it became a late night phone conversation.


In a game of his at the Nova Open, a Tau player was allowed to have his Commander (independent character) join a riptide (a monstrous creature) unit with drones. This allowed for all sorts of oddity overlaps with signature systems, like ignoring cover etc.  A judge later confirmed that this was the rule at Nova.

So my question is this, Can an independent character join a riptide?

My first impression is not a chance (partially an emotional response). The unit composition for a riptide is "1 Riptide Shas'vre" listed on page 100 of the codex, and the drones are upgrades (that do not change the unit composition,even though drones act as additional squad members. Which falls back on the independent character rules.

This is from the Nova FAQs.
http://www.novaopen.com/wp-content/uploads/2013-NOVA-Open-Short-Return-Draft-FAQ.pdf
 Riptides may be joined by Independent Characters regardless of whether they’ve purchased Shielded Missile Drones

So what am I missing?


Here is a pic of the FAQ handout given at Nova with the ruling on it. 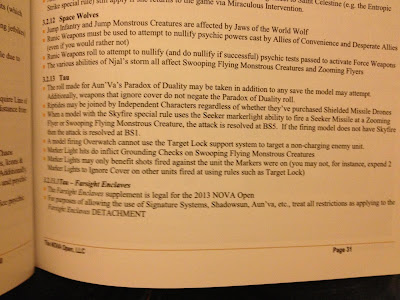