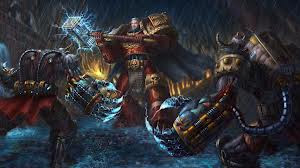 With Space Marines already all that is being talked about everywhere, I wanted to take a brief look ahead and what it is that will be coming. The last time we were looking at this, we had some information that was off, and now with a little more clarity the following is looking very good.


Please remember that these are rumored and based off of rumors. The further out we get, the less accurate rumors are.

Other codices rumored to be being worked on:
Space Wolves, Blood Angels, but no further information yet.

The Future of Supplements
Beyond the look at codex releases, there is a huge list of codex supplements that we would be looking at to be mixed into the fray. White Scars being the first of these to come.

October: (A month of Supplements and possibly a Fantasy Release)
Farsight and Black Legion Print Copy . (this looks solid)
White Scars codex Supplement (looks solid for both print and digital)
Ravenguard: Sometime this year? Possible for October but rumored to be the second marine codex supplement.

November:
Ultramarines: There's a big push for an Ultramarine supplement to be released in November alongside the tyranid book in digital. Supplement will focus on the tyrannic war. Warzone or Supplement, possibly both.