New Race for Dropzone Commander to Be Revealed at GenCon 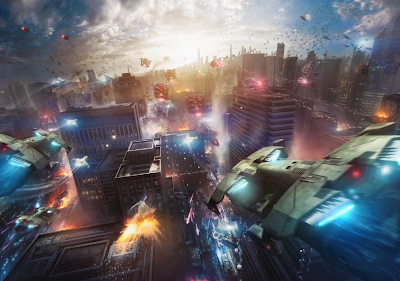 We talked about this a few months ago, a rumored new race for Dropzone Commander. Finally the word is out, and the new race and the models (WIP) will be revealed at GenCon. Newsletter to follow. Please if you are going to GenCon...... my email.......
natfka@live.com

For those that are new here, Dropzone Commander is probably my favorite tabletop game, with extremely intuitive rules, and fast paced tactics on the table. Fantastic game, and now that they have released a new plastic starter set, extremely affordable to get into.


There was a lot of speculation, as when I was able to speak to Dave (the Creator of the game) back in May, the one hint that I was able to receive was that the race was mentioned in the background in the rulebook somewhere.

That left us with two possibilities.......
A race involved with the White Sphere.... or its creators.
A race subjugated by the Scourge... like razorworms but something else. coming back for revenge.

via Hawk Wargames at GenCon Indianapolis 2013
The entire Hawk Wargames team will be at GenCon in just a few short days time, where we will be showcasing the brand new Starter Set in full, taking pre-orders and will be on hand for demo games and questions!

The new plastic Starter Set isn’t the only thing we have to announce this week though! We will also be revealing some of our work in progress, which includes a brand new race for Dropzone Commander! We’d like to keep its identity secret for now though, so you’ll have to swing by our booth to find out! If you can’t make it to GenCon, keep an eye out for our after-action newsletter, which will contain plenty of images of these exciting new models!
8/15/2013
Natfka
Dropzone Commander