The Latest Information on the New Eldar Codex: Huge Compilation 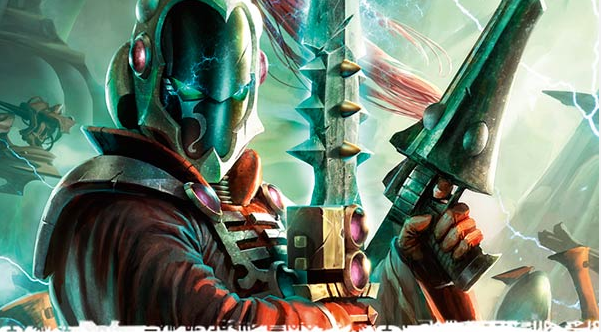 I have compiled a bunch of information that is going on right now, or has been going on over the last day. This is all from Iuchiban on Warseer, and already he has played his first game against Necrons. I included his notes and impressions on the game and how the Eldar now feel on the Tabletop.


my notes-
I am not sure why many sites are not suddenly not including where the information is coming from (site and source), but its not a good trend. Iuchiban has been posting on Warseer, and while its not always apparent where duplicated information comes from, some places seem to be doing this on purpose and this gets copied and pasted quickly so much that the source and site can be lost.

Here is a great compilation of Iuchiban's information, and I have tried to put it all into the the appropriate categories for easier reading.

Please remember that these are all rumors at this point... as we have not had an official release. There is always room for error or overlooked material.


via Iuchiban on Warseer
There are no "chapter tactics".

No changes on Battle focus of the bladestorm rule. No hints on the Iyanden codex.

Distortion Weapons
All Distortion weapons are Strenght D. All of them. But the scythes apply a -1 when rolling on the D table, and the strenght is considered to be 4 when calculating the instant death


Primaris: Guide (no changes)
1: Executioner: Focussed witch fire. 24". Target receives 3 hits, always wounds on 2+. If target diez, another model receives 2 hits. If target dies another gone receives 1 hit.
2: Fatality: You re-roll to wound or to penetrate when firing at target unit. 24"
3: Will of Asuryan: 12" bubble of Fear and Adamantium will
4: Fortune: As always
5: Mind fight: Mainly the same.
6: Ancestral Storm: Warp charges 3 (5" blast), Warp charge 4 (Apoc blast), 24", Haywire, wounds 2+
Names may be different in the English version. (I own the Spanish one).

Warlord traits.
1: 12" bubble. Once per game reroll 1's to wound
2: 1D3 units get Scout special rule
3: Warlord and his unit run +3"
4: Warlord rerolls all 1's when saving
5: Warlord has divide fire special rule
6: Friendly units do not scatter if DS at 12" from Warlord.

Warp Spiders: They may jump during the opponent's shooting phase. If after the jum, the spiders are out of LoS or reach, firing unit cannot choose another target.
Exarch: His unit reroll all LD tests

Warp Spiders: 19/model Monofilament rule has changed.They roll to wound against I, although the T is still used to calculate ID.

Dark Reapers:
25 points per model. They re-roll to hit against anything that flies, turboboosts or moved flat out. All models ignore Jink saves.

Dire avengers: They overwatch with BS2

Howling Banshees
Howling banshees: +3" when running or assaulting. Ignore I penalties when assaulting through difficult terrain. Fear. No Overwatch allowed when Banshees assault
Exarch: Units in CC with the Banshees have -2L
Masks grants the Banshees their Fear rule and denies Overwatch.

Striking Scorpions
Striking Scorpions: Stealth. Shrouded until the fire or assault.
Exarch: During a challenge compare I values. Exarch gets +1A for each point his I is better tan his oponent.
Mandiblásters got a VERY BIG BOOST. On 4+ they inflict a Wound regardless the T of the target. If target is Gargantuan creature, they only wound on 6's. Saves allowed. BTW, Karandras Mandiblaster wounds on 2+/4+ and ignores saves

Scorpions: 17/model, Infiltration, Stealth, and Shrouded until the fire of fight in combat

Fire Dragons
Fire Dragons: +1 on the vehicle damage chart.
Exarch: Once per turn, may reroll one to hit, to wound or to penetrare roll

Swooping Hawks
Swooping Hawks: If the move over a flier, every modl gets one special attack that hits on 4+, S4, AP4, Haywire. They move 18"
Exarch: His unit does not scatter if DS

Karandras (200)
When arriving from reserves can choose any border. His mandiblaster ignores ALL saves.

Baharroth (170)
When DS all units at 6" are treated as hit by a weapon with the Blind SR.

Maugan Ra (195)
Can fire his Maugetar twice per turn (That means 8 S6 Rending shots). Maugetar has an alternative profile: Assault 1, S1, Poison 2+. If one model dies, put 5" marker. All models under the template get a S5 AP4 hit.

On top of that, they have as well the rules listed for their Aspects.

Avatar
avatar his sword is +2S in CC

Wraithblades
Same but 30/model and have Rage.

Wraithlord
Wraithlord remains unchanged.
The glaive gives +1S, but if given to a Knight it becomes SD.

Wraithguard/blades are not tropos anymore if taking

17/model, every model can purchase one scatter laser or shuriken cannon for +10 points

Vehicles
Holofields are 5++,  + 15 points. Fliers cannot purchase it.
Laser lock is gone and Serpent shields got nerfed.
Vypers: 40 points/model. Squad size: 1-6
Walkers: 60 points/model: Squad size: 1-3
Upgrades are:
Ignore Stunning and Shaken with 4+ and 2+ (10 points)
Move through cover (10 points)
When moving flat out: 24" (15 points)
Once per game after moving flat out, may fire a single weapon at full BS (25 points)

Fire Prisms, Falcons, and Night Spinners be taken in squadrons now
Up to three!!!!!!!! And they have special rules if done so:
Falcon: if Deep Strike, first Falcon does not scatter. Others are place at 4".
Falcon can DS only if taken in a unit of 3.

Waveserpents
Yes. If the shield is fired, you lose it for the rest of the game.
Serpents are 110 points, and shield is now: S6, Assault 2D6, Ignores cover, One use only.

Crimson Hunter
Crimson hunter basically the same, but 140 points only.

Hemlock
Same cost, has Lvl 2, can choose Daemonology (Sacred), Telepathy and Battle Runes. D-Scythes are a special D weapon as mentioned above,.

Farseer
Ghost helm: When suffering a wound from perils, Farseer can spend one warp point and ignore the wound.
Runes of the farseer: Once per turn, Farseer may reroll a psychic test.
Farseer is equipped with both by default. Farseer has same cost.

Spiritseers
Same but: (Only Elites)
- They do NOT make wraith units Troops.
- Any wraith unit (Guards, Blades, Lords, Knights or Hemlocks) may reroll 1's to hit if target is at 12" from Spiritseer.

Illic
Illic weapon is NOT D. He always has precision shots. If the joins a unit of Rangers, all the models in the unit get this ability
Rangers have Shrouded

Formations
Guardian battlehost: Vypers, Warwalkers and Vaul's support batteries get preferred enemy if they have a unit of Guardias at 12". Guardians can purchase a Platform for free.

Windrider host: Once per game all formation gets Shred when firing shuriken weapons

Guardian Stormhost: Vypers, Warwalkers and Vaul's support batteries get preferred enemy if they have a unit of Guardias at 12". Storm guardians can purchase 2 special weapons for free.

Aspect Host: They re-roll LD tests and get +1 to WS or BS.

Dire Avenger Shrine: Once per game, Shuriken weapons are Assault 3. +1 to BS

Crimson Death: Preferred enemy (Flying things), 4+ cover save, and if Jink, may re-roll the cover save.

Wraithhost: Get battle trance, if targe is at 18" or less from spiritser, reroll to hit

Here are my first impressions:
- Wraithknight is absurdly good. I run the Sun cannon + Shield one. Fire the Sun Cannon at some Inmortals, fire the scatter laser were I want to assault. 3+/5++/FnP in a R8 W6 model? Really this guy is unstoppable.

- Fire Dragons are redundant. D-scythes destroy vehicles much better. 5 auto hits that on a 3+ cause one penetrating hit with D3 hull points. No cover. And if there is a unit of Necrons Warriors inside the barge ..... This unit is simply OBSCENE. If they are in the detachment they have Battle Trance ... run + shoot the D-scythe. No more to say

- Warpspiders are much better now. They destroy one C'tan Shard in a single volley. They wound on 2+ to almost everything in the game. They are Little bit worse vs vehicles now ....

- Farseers are really good now. Rerolling one psychic test per turn is very powerful when you need to harness 4 Warp Charges for that Apocaliptic blast power.