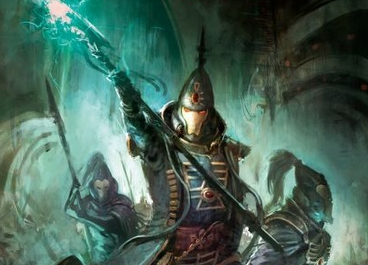 Literally the sky is not falling..... its just covered by the shadows of thousands of Eldar Windriders and the masses of towering Wraithknights that are going to be hitting the game table soon. While there is still a lot to see how the codex turns out, from point costs, to special rules etc, there are a few things that are creating havoc throughout the community..... WraithKnights, which we covered well earlier,  and now Windriders and Destroyer weapons on Infantry models. Sounds Crazy? Well it just may be.

The text right of this weekend's White Dwarf states......
The Eldar have more Destroyer Weapons than anyone else- Wraithguard, Wraithknights, and D-Cannons are going to wreck true destructive havoc.

Wraithguard with Destroyer weapons, and heavy weapon teams with D-Cannons. Whoa. Literally this gives D weapons to what might be called a ridiculous number of units depending upon which side of them you are facing. While we dont know if these weapons will have other restrictions, or the point cost will make up for what they are becoming, it can get a little OP to find Wraithknights with Destroyer Weapons on them.

Windriders. Another big topic lately. For 51pts you get 3 eldar jetbikes with jink and a 3+ save. Add in 10pts for each bike and now you get Scatter lasers or Shuriken Cannons. You heard that right, S6 heavy 4 shots on an eldar jetbike. These are troop units, and you know that will result in a massive amount of S6 shots. The numbers of these shots reminds me of the GreyKnight Psyback lists on steroids.

Of course we will see where this goes soon enough. One thing I am concerned about is the restrictions many places put on D weapons. If they are not allowed for instance, then just how many units in the new Eldar Craftworld codex will be not usable in many different gaming formats.

I am looking forward to dusting off more of my old Eldar, and the direction this is going really has me watching closely. I dont want to see it way over powered, nor do I want to see it nerfed down to where we dont see any eldar on the tabletop.
4/15/2015
Natfka
40k, 7th Edition, Eldar, New Releases, News Headlines, Warhammer 40k