Plasma Obliterator and Promothium Relays are a Heavy Support Choice 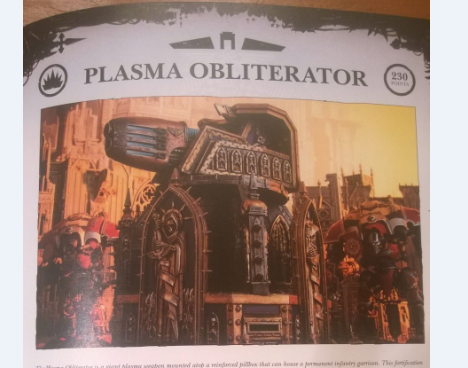 This really has not been talked about a lot, and I did not see it either, but the Limited Release Plasma Obliterator scenery piece is a heavy support choice. The rules were released in last week's White Dwarf, and the model is now very much gone for good (customer service has confirmed this).


Check out the image below from last wee'ks White Dwarf to see for yourself. This is a cool piece, that takes up a heavy slot? Whoa. Too bad its gone.

Now its also you can see that the Promethium Relay Pipes are also a heavy support choice. I believe that this is a first for 40k to have a scenery piece take up a slot as anything but a fortification.

Later today the model should be hitting stores, and it will be interesting to verify the rules inside the box repeat the heavy support slot. 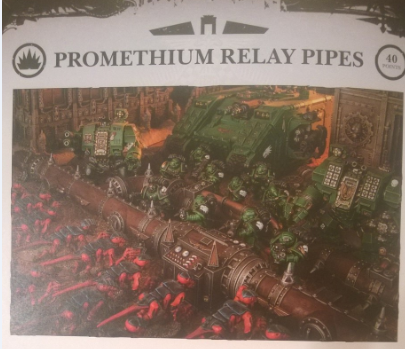 via a reader on Faeit 212
Hey Natfka, an interesting tidbit for you that I think has gone mostly unnoticed. The plasma obliterator and promethium pipes are listed as a heavy support choice in white dwarf, not a fortifications choice. Extremely odd. Not sure if this was a glaring mistake or intentional by GW. As it is now, that means you can have 3 plasma obliterators + a macro cannon strongpoint in a standard CAD....not sure building spam would be competitive, but it sure would be fun!!!! (and super expensive).

I did also talk to us customer service and they confirmed no more plasma oblits.  Bought mine on eBay at close to 200% value .... IMO and that of my local store, preorders for limited items should be a month in advance, that should give GW time to plan a proper quantity, eliminate the mad rush and stop smart eBay sellers buying the everything up and selling at high price.
4/17/2015
Natfka
40k, 7th Edition, New Releases, News Headlines, Warhammer 40k