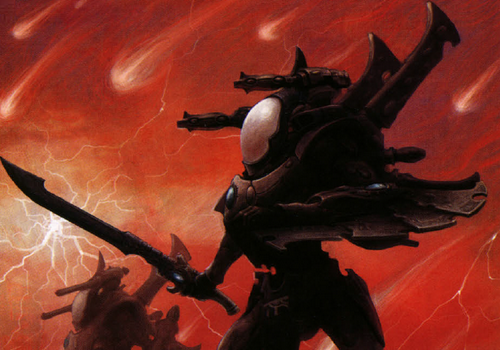 There are a few significant changes coming to Eldar next week when the Codex: Craftworlds hits the shelves. A couple are really being talked about.... like weapon upgrades for Windriders.... and D Weapons for Wraithknights.


Wraithknights.
If you have not yet heard what is coming, here is a brief rundown of what this weekend's White Dwarf is revealing.

Both of these are now D-Weapons. I of course still prefer the Wraith Cannons shooting from a distance.

It was also noted in the White Dwarf, that the magazine pits up a Wraithknight against many different foes to see how they do. In close combat with a Bloodthirster, it was noted that the Bloodthirster (with an Init 1 axe of khorne) did some damage but did not kill the Wraithknight outright (its now a gargantuan creature). This leads us to believe that the ghostglaive struck also on Init 1 as it killed the bloodthirster outright.

Gargantuan Creature......
yea, its true. What will that mean to the point costs? We have no idea yet.

How many can we field at once?
The worries of a Wraithknight becoming a Lord of War are still unknown, and for those of us with more than one Wraithknight model already, it was a little worrisome that you might of well shelved the extras. I really like the model itself, and they are enjoyable to assemble. So how many can I take?

Well, we got a first look at the new detachments for the codex. What we now know is that despite point costs... (we dont know this yet), you can take an auxiliary detachment called Wraith-Constructs. The detachment would only be a single Wraithknight, but you are allowed to take 1-12 of these auxiliary detachments per Guardian Host. So it all comes down to points, but it does appear that multiples of Wraithknights will still be possible.
4/15/2015
Natfka
40k, 7th Edition, Eldar, New Releases, News Headlines, Warhammer 40k