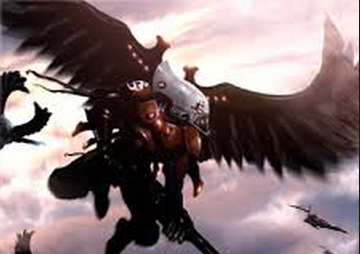 Eldar leaks are starting now, and there are several of the new eldar jetbikes along with the new Autarch and the Codex Cover. Its is looking like this is a complete codex replacement, with new units and more focus on the individual craftworlds.


Leaked Images are Appearing as we speak. Now that we are seeing the new jetbikes.... what do you think?


via Manwë
http://www.warhammer-forum.com/index.php?showtopic=229838&page=5
Some people on a French forum have seen the WD.

The WK's heavy wraithcanons are now D, and the sword too. He is gargantuan (and probably LoW I think).

Jetbikes rules are the same, no changes and same slot (but new minies, and they are cool!).

Walocks are not in the Wildriders box, but is an option in the Jetseer pack =D (1D6+100 of dat things for me, kthxbye).

There is a "Decurie" (don't now the name of the Necron special host in English), called Craftworld Warhosts :

1 to 3 guardians host (Wildriders, guardiens squads and the ones from Ulthwë) unlock some extra stuff for all the craftworlds. For example, 1 3 Wildriders choices unlock some stuff for Saim Hann host.

You can take for each guardians host 1 to 12 choices of some unit in the codex (crimson, tank, avengers..., but also aspects warriors, ghost warriors, wraithknight and wraithlords. But seems limitated to 1 for the 3 lasts).

The Autarch on foot has swooping hawks wings, and is awesome.

New codex of 160 pages with description of 11 craftworld (nothing about specific rules for them).
2 new specific psy discipline (battle runes and fate runes).

CC weapon of the wraithknight is D weapon.