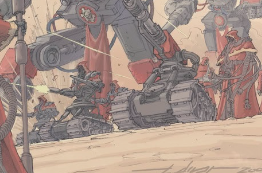 Kataphron Destroyers are mechanical bodies attached to track assemblies. The rumor this morning pins them as Heavy Support Choices with plasma cannon and other large heavy weaponry as options. According the same source, these may be a dual kit, with a close combat variant optional build.


The Cult Mechanicus rumors are coming on strong, which makes it seem very likely that we would see its release possibly in the next couple weeks.


Please remember that these are rumors. Captain Citadel had previously released descriptions of these models, and that can be read at the link. http://natfka.blogspot.com/2015/04/cult-mechanicus-units-revealed.html

via Captain Citadel on the Bols Lounge
http://www.lounge.belloflostsouls.net/
The name of the new tracked infantry models that will be releasing are Kataphron Destroyers.

They are the lighter armoured tracked infantry variants that features two types of cannon; a version of the familiar plasma cannon and a newer larger tech-based calibre weapon of mysterious providence.

The models themselves feature a mechanical upper body hardwired both into the track assembly and weapon arms, but can swivel at the hip whilst their power feeds are contained into rear back mounted power sources.

Each miniature has the main weapon attached to their right arms which are cropped at the shoulder, and their left arms contain a smaller hand held flamer type weapon.

Their heads are rife with targeting reticules and there is no organic components visible on these versions of the models.

They are heavy support choices for Cult Mechanicus.
4/27/2015
Natfka