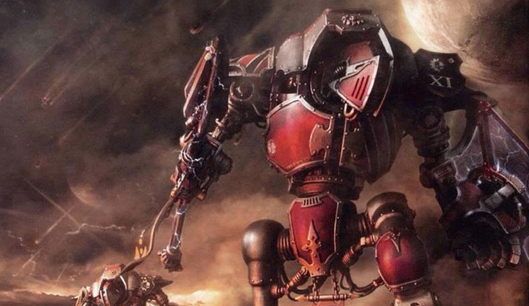 The news continues on an Imperial Knight release that includes two new units, an Imperial Knight Warden, and Crusader. These guys look large and powerful, with 8 hull points, heavy armor and a single energy field. Check out the latest.


Please remember that these are rumors. There were some earlier rumors as well on just what this release would be.. you can find that article here.
http://natfka.blogspot.com/2015/04/imperial-knight-new-model-releases.html

via Bird in the Trees on Bols
Crusader is armed with: Quake Cannon, TL Las-cannons
Warden is armed with: Volcano Cannon, Multi-barreled Autocannon
Both models have an optional top carapace missile launcher weapon mount, with multishot S8, AP3 anti-flyer capability
Both models are protected by a single energy field based heavily on the rules for the Stronghold Assault book’s Void Shield Generator.
Armor Values: Front:14 Side:13 Rear:13
Hull Points: 8
Both models clock in well above the cost of the Knight Paladin/Errant
4/24/2015
Natfka
40k, 7th Edition, Imperial Knights, News Headlines, Rumors, Warhammer 40k