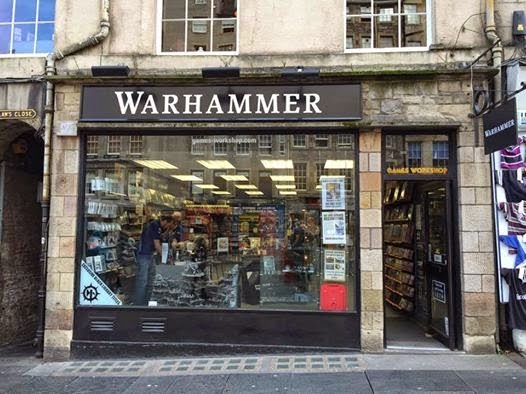 Last year we were talking briefly about Games Workshop changing their storefronts to "Warhammer". This has happened in a couple places, and on occasion I get contacts discussing it, or readers that say yea! I was travelling and just saw one. Well, according to rumors, this is now spreading to other stores.


Here is the latest on additional stores getting a new makeover.

Previous Article on Rebranding. The only stores we have heard about so far are these, Edinburgh, Chiswick, and Bath.
http://natfka.blogspot.com/2014/10/games-workshop-stores-rebrand-test-new.html

via a reader on Faeit 212
remember when some GWs in UK got rebranded to "Warhammer" last year?
Seems like the rebrand is becoming a real thing, at least in Germany.

Yesterday while pickung up my Mailorder stuff i overheard the Manager of
my local store talking to some customers asking about Videogames (seems
to happen pretty often).
After the customers left, we had a little chit chat and he mentiond that
he's hoping that those siutations will be gone when the storefront gets
reworked.
I asked if hes refering to the Store Rebranding rumors. He said that
his Shop will get a new storefront and will be rebranded to "Warhammer
Shop" sometimes this year.