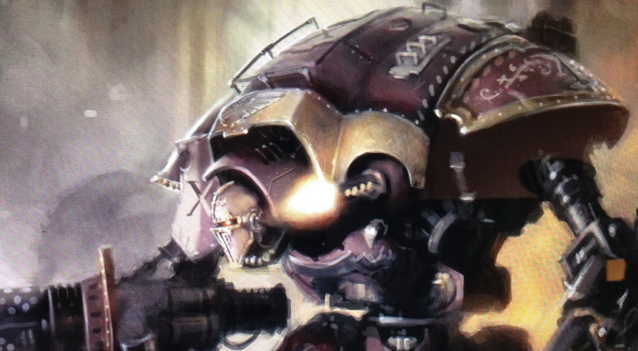 There are a lot of rumors about new Imperial Knights, and even re-directs (which have been removed now) have shown Imperial Knight releases coming in the near future. Two new models, a Warden and Crusader are coming, and this rumor points to them with some new updates and formations coming.

via Bird in the Trees on Bols
Both Knights are coming via a combined combo kit.
Plastic kit will be released in the short-term, but the exact week is unknown.
The Warden & Crusader will share White Dwarf only rules initially, with inclusion in a codex coming later.
The new designs do not share the “turtle shell” carapace, and have a divergent appearance.
Both models share an up-armored, brutal appearance compared to the Paladin/Errant model.
Both share three weapon hardpoints, 2 arms and a top carapace mount.
Both new Knights share a Heavy Support position in a Imperial Knights army list.
Expect an Imperial Knights “Decurion” formation to be arriving with the new kits.
4/23/2015
Natfka
40k, 7th Edition, Imperial Knights, New Releases, News Headlines, Warhammer 40k