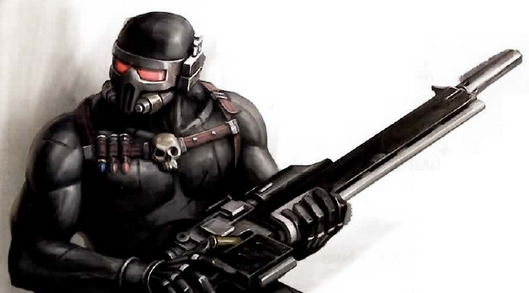 The assassins in 40k already are very powerful additions to armies, with the Celuxus assassin being a big favorite of many armies now. The rumored stand alone game featuring the 40k assassins may be right around the corner. The rumors are suggesting this, and if you missed them, Atia was happy enough to give us some insight in the comment section here on Faeit 212 here at this link.

Here are the latest sightings of the new game.....

via Colonel_kex on Warseer
New assassin models!!!
Caught a glimpse of next weeks white dwarf cover and NEW ASSASSIN MODELS!!' All 4 of them get new models introduced in some sort of either minigame or spece hulk like boxed game. They looked awesome!!!

via Ziek in the comment section here on Faeit 212
they are all in plastic and very detailed..and yes can be used in W40k

via Sad Panda on Dakka (unsure if he was talking about Horus Heresy or Assassin game)
Miniatures are not snap fit, but the game(s) in the box(es) is(are) definitely more board-game-ish, played on 2D card-board tiles.

via Bird in the Trees on Bols
4 Assassin models in the box, one for each temple.
Various non-imperial opposition models.
A board game in the general style of Space Hulk.