Enter The Citadel: Sisters of Battle/Black Templar and Much More 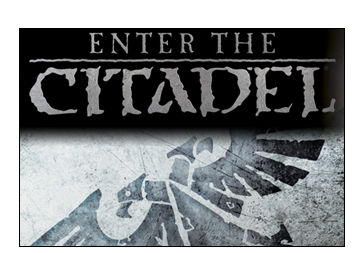 The Enter the Citadel Event has come and gone, and Mauler, a reader here at Faeit 212 sent this in. (I think he also posted it up on Warseer). This is a great report on the event, and some great information, especially the parts that reiterate what our sources here on Faeit 212 have been saying... No armies are losing their codices or going away.

Here it is, enjoy.

A huge thanks to Mauler for sending this in to Faeit 212 yesterday.

via Mauler from the Faeit 212 inbox
Keep up the good work, mate!  I was at the Enter The Citadel event yesterday.

Just got home from this event and it was pretty damn good. Got to chat with Jes Goodwin, Jervis Johnson, Phil Kelly, Kevin Chin &; several other BL &; FW guys. Sat in on their Designing Apocalypse & Warhammer Feedback sessions where they talked about the subject and we got to field questions to them afterwards.

Some blitherings:
Apoc is seen by the GW studio as a toolkit for massive games rather than a rigid framework, leaning towards making big games easier to organise and play rather than sticking to the background setting. The Allies matrix in the 40k rulebook with "Come the Apocalypse" is the truth; in Apoc you can ally with whichever faction you like. Formations are in there to give players a direction to go for with their collection: if you've got two Predators, pick up the Apoc book and are unsure about what models to get next (I'm paraphrasing here and I didn't pick up the Apoc book myself today) then leafing through the Imperial formations you can pick up one more Predator and get bonus rules for the 3x Predator formation, whatever it's called.

Formations don't have points values as they're not units in the same vein as the core rulebook &; codices, they're mainly there to provide bonus rules if you have groups of specific models and make things more interesting. The guys got the point across that if you don't like a particular rule you can just leave it out; if you don't need a particular tool in your toolkit you're not obliged to use it. Master Of Disaster which originally had a Viking helmet to pass around each turn to identify the Master) is wrecking massive chunks of table? Don't use it. Finest Hour? Optional. It's all there to be used as we see fit, it's even less of a tourney focused expansion and is basically a guide on arranging and playing oversize games with mates.

War Zone books for Apoc will be more like mini-Imperial Armour books than supplements and will include new scenarios, unit datasheets, rules & historic background, orders of battle and timeline maps. The studio will use them to pick significant battles from the history of 40k (like the Battles For Armageddon) and flesh them out in detail along with rulesets for players to enact them.

SISTERS OF BATTLE/BLACK TEMPLARS will get attention and are not in line to be dropped at this time. I spoke to Jervis Johnson and asked him myself and he said "Every army is getting worked on and will be updated in time." But obviously in true GW fashion he couldn't say when or if it would be via codex or supp. Personally I believe codices will be used when I consider what a supplement is for, but that's just me.

I was talking to Jes Goodwin about how much I love the design of Wraithguard & Wraithblades when he actually beat me to the next thing I was about to ask "Are you about to ask about those jetbike models like the last guys did?" Ha. Apparently Jes was given a choice to make: either go with new Wraithguard/Blades into production OR the new jetbike model. Jes thought that the Wraiths brought more options to the table and were more valuable as a brand new unit choice, while the jetbikes already have an existing model and didn't bring anything new. As much as I'm sick of the current jetbike model I do think that Jes made the right call.

Also Eldar related: I asked Jes about another artbook of his Eldar work and he replied that he had enough material to fill a book each for DE &; CE (and based on the three folders that he had with him alone I believe him) and it has been discussed but ultimately it is down to the Black Library to make this happen. I then wandered off to find the BL stand and accosted them, demanding to know where these books were. The chap was pretty open about it and said that the publishing arm of GW had formed two new units to work with the normal BL staff; GW Digital &; BL Direct. The Digital arm are getting into gear with digital online publishing, hence the emergence of codices outside of iTunes, and the Direct team will be handling specialist work such as art books, extremely limited runs, collector's editions, stuff like that. I'll be speaking to the guy soon to get more info as he said that he'll speak to some people about it so there is hope yet.

Jervis and Phil were interested in what people wanted, a focus on codices or supplements as the same guys do work on both. The was one chap who gave them a "I don't care about new codices, I just want more interesting ways of using my forces" case for supplements but that smacked of "I'm alright so sod those poor guys with old books" and he seemed, thankfully, to be the minority. Like the Popular Front Of Judea, if you know what I'm talking about. I got the impression that GW are sticking to the current monthly releases so supplement work shouldn't stop 40k codices from being released but may impact their release order depending on who is working on what and when.

All in all it was a pretty good day. I'll update with more if anything comes to mind and if anyone else who was there has anything to add then please feel free

Also saw a few 'Cron Tesserract Arks. When they're open they are MASSIVE. Like a foot square at least. Mad.