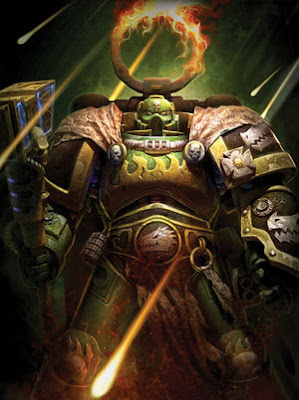 Vacation
My passports is ready, and I am mostly packed to hit the road first thing in the morning on Tuesday before rush hour traffic hits. For those long time followers here on Faeit 212, you might be starting to recognize the pattern. Every two years, (and sometimes a trip in-between), I head up to Edmonton Alberta for a couple weeks.

Now the trip is to visit family (more specifically my wife's family), so its not much of a gaming trip. I do however try and get down to visit the local Games Workshop store in the Edmonton mall, and I will be doing so again.

So how does this effect the site? well, it doesn't really. There are few Tim Horton's nearby where I will be staying, so they will provide a good place to get site work done.


I have gotten in a couple of games of Hell Dorado, and have very much enjoyed each game. I had been borrowing some Daemon models, and now that time is over......

I just received two starter sets of Hell Dorado, both the Westerners and Demons, and some more models to really expand the collection of both armies. I will be doing some unboxing of the models, and taking a closer look at them before I leave, and of course will be taking the rulebook with me for some reading.

So look forward to some Hell Dorado games in the near future, and by the time I get back from the vacation, I should have the rules down.

Codex Supplements
There has been a lot of information on codex supplements this last week, and I really need to sit down organize the rumors into a release order, based on the information I have. I will be doing that soon. That way we have a much clearer picture of how I am interpreting the the information from various sources.

Tau getting another couple supplements though is very exciting, and if the first one is Kroot, its the one that follows that has me really fascinated. Could there be a new allied race added here?

So I will be definitely getting some posts ready for my two days of road travel, and during that time I will filter through the release rumors.

Space Marines
Coming to us probably in September, this will definitely be the biggest release of the year, as it effects the most people. I am hoping that we start hearing a little bit more information very soon on what is coming.

Solid Rumors thus far.......
The codex will not be Ultramarine focused.  Instead the pages describe the book representing any of the second founding chapters, and many of the founding as well who converted to following the Codex Astartes.

Space Marine special character changes to Combat Tactics still exist, but are also now available for purchase as an upgrade to a generic HQ allowing you to play Ravenguard without Shrike, or Salamanders without Vulkan.

"larger terminators" - these models are described as being similar in aesthetic to the curving shapes of both the Contemptor and Tau Stealth suits. Bigger than current Terminators - but smaller than a Dreadnought.
7/28/2013
Natfka
Presence of Faeit, Space Marines