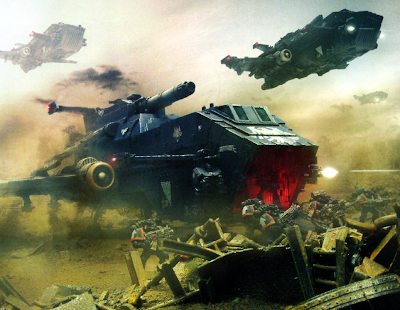 Formations, Divine Intervention, Finest Hour, and more are in this set of leaked information for the new Apocalypse book. Discover what formation types there is, and what they consist of in the leaks below.


Please remember that these are still considered rumors, so please give them a little salt until we get the book in hand.

via Loken on Apocalypse 40k

I got to ask someone with an Apocalypse Rulebook some questions.  Here is the first of them along with answers straight from the Rulebook

Formations do not cost anything to include and they're split into sections, which are:
Armoured Spearheads
Flyer Wings
Battle Formations (this is the old basic formation type)
High Commands
Massive fortifications
Psychic Choirs
Super-heavy vehicles/walkers/flyers and Gargantuan Creatures/Flying

Armoured Spearheads are for vehicles, there 3 formations you can do and each one gives the vehicles a special rule.  For example if you place 5 predators side by side with the front forming a straight line they would be in "broadsword" formation and gain preferred Enemy.

Flying Wings are the same, just with flyers :)

High Commands: Models in this are treated as 1 unit, examples of this is the phoenix court of khaine where you have the avatar and the 6 phoenix lords in 1 unit, or masters of the chapter where you can have 1 chapter master, 0-1 honour guard, 4-10 captain all in 1 unit (and they cant leave even if they're independent characters). Once per game you also can get another strategic asset per high command. They can also order an all-out attack, which makes a single unit triple it's movement but cannot shoot or tun, but can assault.

Massive Fortifications are obviously the ones we saw, some have an AV of 15!

Psychic Choirs have a special psychic power that they can use and pool all of their warp charge points.  Theres a different table instead of perils of the warp if you mess up on this power though, wont spoil everything but lets just say some big daemons can come out...

Super Heavy Vehicles can use a ram/tank shock attack called thunderblitz, has its own table, can run over models and hit vehicles hard.

Super heavy walkers cannot overwatch even against other super heavy walkers or gargantuan creatures, same applies vice versa.  Walkers and gargantuan creatures have a different "stomp" attack now.  They get D3 stomp attacks and each stomp is a 3"blast marker, 1st one touching the walker, then other within 3" etc.  There's a table to decide what happens under each stomp, for example on a 6 all normal non vehicles models are removed from play so getting up close can be a bit riskier now, although the 2-5 result is a S6 ap4 hit.  can stomp normal vehicles too, the 6 result is fun.

Super Heavy Flyers cannot evade and are destroyed the same way as the super heavy vehicle (not the crash and burn rules for normal flyers).


Finest Hour
Each warlord can use this once per game, it's like a warlord trait but much more pwerful, also for that turn he'll have a 3+ inv save and eternal warrior but if you do lose him in that turn the opponent scores 1 strategic victory point.  There's 3 tables to roll on to see what he gets.   For Space marines and the chaos ones theres a table with all the different 1st founding chapters, all of them have a different ability which is a really great (it's called Sons of the Primarch instead of the finest hour)

Divine Intervention
Another table... this one is split depending on the gods or something close for others (hive mind, greater good etc), so the emperor for imperium, gork and mork for orks etc.  These events have a trigger component so for example for the imperium, it triggers when you lose half of your army, all units will then gain Furious charge and fearless and effects lasts until his next turn.

Void Shields
Void shields work differently now.  Instead of the roll per structure point left you now roll for each void shield that's collapsed and on a 5+ you regain it. You roll at the end of your turn.
7/08/2013
Natfka
40k, 6th Edition, News Headlines, Rumors, Warhammer 40k