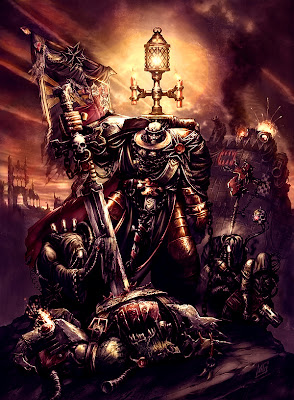 The Black Templar are definitely being worked on, and today we have some army specific rules to take a look at. We are still a little ways out on this codex, however it could be released later this year according to rumors. Black Templar should be rejoicing at this point.


The following came from an earlier playtest set. These are meant to get an idea of what is being worked on, and some of the ideas being tested, as I am sure at least some of this has or will be changed or altered some.

One thing I find interesting is that it looks like Games Workshop is looking at ways or means to move units into close combat without suffering the effects of overwatch until after the or at the end of the assault. Possibly a push to throw more close combat into the game?

Even though we are getting these, Space Marines are still next according to the rumors. (I am looking forward to seeing more on them as well).

via an anonymous source on Faeit 212
Neophytes get their own unit entry, 5-10 unit size, they're 0-X max, where X = squads with the crusader keyword (crusader squad, sword brethren, assault squads, bike squads). It seems like the terminators either don't take squires anymore or they fall under sword brethren.

They get attached to squads with the crusade keyword at the start of the game when the main squad is deployed or they can be deployed independently.

They're troops, but if they are attached to a unit they take on whatever squad type the parent squad is. Otherwise though they take up no force org.

Initiates come with bp/ccw and grenades, one in 5 can take an assault gun, and their squad size is 1-20. 11 points each. They can replace their weapons with blotters for a price. They're bs3, and can buy bs4 for a price.

Can take land raiders as dedicated transports at a really decent price reduction.

All power armoured models roll 3D6, pick the two highest to charge. Casualties they take from overwatch are done after initiative 1 attacks are resolved and before combat resolution using the new "closest models." (basically distributed as CC)

1-3 per choice elite champion-like model who takes vows. Vows are a lot like dark angel banners and revolve around objectives (defending or taking), but only apply to the unit they've joined and are a bit more toned down. Reminiscent of space wolf oaths.

HQs get access to better vows, and are different for chaplains and Captains. Emperor's champion is only required in games over 1500 points, does not take up an HQ slot and does not have macro-vows anymore, instead...

The army buys a vow for 0-40 points for every 1,000 or more points the army is. You can only buy one vow and it basically stacks in cost the bigger the army is.

Some vows are cheaper than others.

Vows have either an anti- psyker or xenos feel.

Squads that have taken casualties are subject to rage for the remainder of the game.