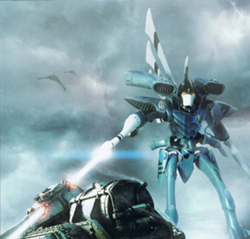 It seems that many people have the Apocalypse book now and information will continue to flow throughout the week. So here is a look at the next batch of leaked information for Apocalypse.

Wishing I knew someone out there with the book right now, (for a QnA). If someone is out there has the book and is willing to do a live QnA here, let me know.


Please remember that until we get the book in hand, there is always a chance for errors. A little salt is required.

via Warseer
Checked for answers at a friend's place, here's what I could gather:
Barbed Hierodule is in at pg159

Pg 117 is a photo of grey knights, pg 118 is a small introduction for Chaos (there's a page like this for imperium, chaos, orks, eldar with dark eldar etc so some missing pages are just text).

Holo-Fields
Eldar titan holo-fields: Before rolling for damage (including the destroyer table, so yes they work vs D weapons) you roll a D6 per hit so see if it hits the titan or the holo-field image. If it moved it hits on 4+, if it didnt hits on 3+. Same thing for he revenant. Phantom is pages 146-147, revenant 148-149 if you want to update the list

Apocalypse Fortifications
The aquila strongpoint can be armed with macro cannon or vortex missile (it isnt remove everything it touches anymore although still powerful). They cost quite a bit, AV15 all sides. Macro cannon can fire in 2 way, 1st is 2 D shots large blast, 2nd apocalyptic megablast at S10/7/5 Ap1/4/6 (1st number for the 5" at the centre, 5-10" 2nd, 10-15" 3rd). this shot also has a sonic boom rule, which affects flying stuff in the patch of the shell, not going to go into more detail as the mods will kick me out soon

Titan Optional Weapons
Can you please just confirm if Titans pay extra points for different weapons or as current they swap them out for free.
For old models like the reaver/phantom titans etc it's still free to choose. Others like the tesseract vault/transcendant c'tan have to pay for their weapons, so maybe newer models will be following this example. The D weapon for the c'tan is hellstorm template, and it isnt the highest points cost ability that he gets, there's 2 that cost more.

Is the SM Fellblade in there?
No it's not, wished it was there too myself. Hopefully it'll be in Forgeworld's Imperial armour apocalypse, or maybe they could release a Warzone with heresy vehicles but with updated points for 40k apocalypse. We also dont know what's in the 2nd Warzone book which comes with the limited edition but we'll have to wait until next week for that.

Necrons
The tesseract vault chooses 2 powers (weapons) from 6. if you deploy the transcendent C'tan on it's own (which counts as a gargantuan creature) you choose 1 power from 3, and 2 weapon powers from 6 again. C'tan outside of vault costs more than being inside. So buying the tesseract vault to field it as the Obelisk and tanscendent c'tan is quite a bargain in my opinion as you'ed be going very close to 1k points with just 1 purchase.