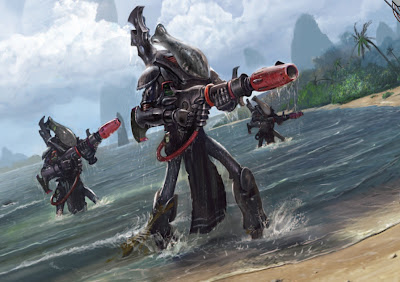 The rumor mill has been a little slow this last week, as it was dominated by Apocalypse information, which can no longer really be rumors; Its been released. So that is rather old news, by now, and the rumor mill will be moving rather fast here in the next day or so. Hint hint.

My own gaming tables have been a little light lately. I did get in a game of Helldorado recently, but since I solved the Dark Eldar/ Eldar allies issues I was having, I have not had a chance to get in games. Perhaps because summer gets rather busy?

Dark Eldar and Eldar
So whats on my tables right now? I am busy painting up my Wraithguard with D-Scythes. After lots of testing my Wraithguard out, I am set on D-Scythes, so much in fact that magnetizing them is not really necessary.

So yes, I have started my Wraithguard, and there may be some pics up if I can get them done. Pairing up Iyanden and my Dark Eldar just seems like such a beautiful match up, all the way from background to how they play on the field.

Dropzone Commander
The next thing on my painting table is my Dropzone Commander. Painting up my UCM, and looking forward to getting my Scourge going. I was on their site this morning shopping for new models, so very soon, I will flesh out both armies up to 1500pts. Its very easy to do. Here is the formula.

Starter Set+ Command Vehicle+anti air with dropship+some aircraft= Done
that formula is easy to do, was suggested by David (creator of the game), and is inexpensive.

What has me excited about this type of information, is the tie ins. Armageddon being released with the Apocalypse book, could very easily tie into future codex and supplement releases. My background is Architecture, so when I see good game design, release schedules, and even what is being released all tied in and logical, I get all warm inside.

For years, codex releases have seemed all but random, more on what was out of date or needed an updated rule set. With 6th edition things have started to change. Chaos Space Marines and Dark Angels have a sinister and secret history that just was not capitalized enough with the releases. However, this was possibly the starting point for something grander. An undercurrent that had just not yet come to realization or fruition.

I am hoping that this is something we start to see in the future. There are just so many great crusades and campaigns that could be used to launch product, and set the mood of the game. If Armageddon is used as a tie in, and Orks and Black Templar (featured heavily in the campaign) are released subsequently, I can see the future.

If you have not yet seen this article or been a part of their raffles, check it out. You can win some great armies for only a very small donation. I did a full post up earlier in the week, and you can find it here.
http://natfka.blogspot.com/2013/07/nova-open-charitable-foundation-inc.html

The charities involved with these raffles are Doctors without Borders, the Fischer House Foundation, and the Breast Cancer Research Foundation. If you have concerns about the charities, I highly suggest a simple phone call or contact the Nova Open Charitable Foundation through their site.

If you have any interest in this, please check them out. If for nothing else, there are some cool models that you can get into the raffle to win, for as little as $10.