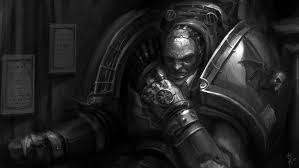 Which Chaos Legions will see a codex supplement has been a hard topic of conversation. Of course the same can be said for Eldar craftworlds, Space Marine Chapters, and more. This rumor takes a look at the future of these codices, and there is a surprise regarding Tau.

via an anonymous source on Faeit 212
Not all sub factions within 40k will receive supplements. Only those who have the potential to bring an alternate yet characterful play style to the tabletop and have the scope for expanding the lore.

Just over half the space marine chapters of the first founding will receive a supplement.

The mono-god legions will NOT be getting a supplement. It's felt they are well enough reflected in the codex. Iron Warriors, Night Lords, Word Bearers were given as Examples of Chaos Legion Supplements

Out of the four remaining craftworlds, there's only plans to turn three of them into supplements.

Tau are not scheduled to get a single additional supplement, but instead there's going to be three!!!

I feel that two Tau supplements more than expected might possibly mean support in the way of new miniatures and perhaps a whole new range. GW as a whole may be gearing up behind this.
7/27/2013
Natfka
40k, 6th Edition, Rumors, Warhammer 40k