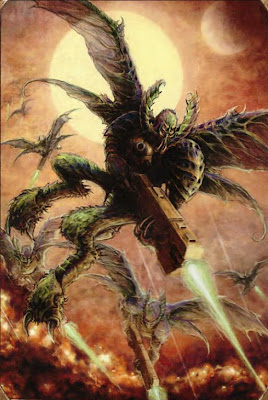 Yesterday we broke a rumor in the weekly rumor round-up, that Tau had a second codex supplement in the works. This would be a Tau Mercenary supplement, that had Kroot and Vespid as the main thrust of it, and included HQ choices for the army.


Later yesterday, that was verified by another very good source here on Faeit 212. While I was told yes, it is happening, I was not given anything else on it, so I presume its not on the immediate release schedule (within the next 6 months).

I was however back before we had any codex supplement rumors, discussing these mini-dex's (about a year ago), and its worth pointing out that the conversations were saying that these dex's, this one in particular would make it possible to play a non-Tau army. However, it was not really meant as that, but instead as an ally, so would not include options in every FOC slot.

So what are we expecting to see when this Tau Supplement hits?, we still do not know. The only thing we know, is that one of our most solid sources has verified that a Tau Mercenary supplement is coming.

In case you missed yesterday's rumor bit, here is the main thrust of it.
via an Anonymous Source on Faeit 212
Tau Mercs
another Tau Supplement is in the works, it lines up with a few other rumours I've heard about the Tau before it was released to the world. Vespid and Kroot HQ choices, and the ability to play a non "Tau" Lists.
7/22/2013
Natfka
40k, 6th Edition, News Headlines, Rumors, Tau, Warhammer 40k