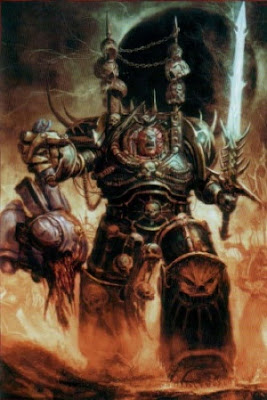 Warzone Pandorax is a clash between Abaddon and the Chaos Space Marines against the Imperial Forces, the Dark Angels, Grey Knights, and the Imperial Guard. Lots of fun are in these formations including, the Brass Scorpion of Khorne and the Khorne Tower of Skulls. Lots of fun.


Pandorax was released only the collectors edition release of Apocalypse. So most of us have to wait for several months until the next Warzone comes out. In that spirit, I thought we could take a look at each formation in the warzone, and get an overview of what the unit can do.

Formations:
Warning: These are not complete rules for any listing, but is just enough to give readers an idea of what each formation is designed for. Very Incomplete listings.

Chaos Space Marines
The Chosen of Abaddon: 3-5 Lords or Sorcerers, 1 Chosen or Terminators unit for each Chaos Lord or Sorceror
Each Lord or Sorceror gets a boon, and Abaddon radiates fearless around him.

Deamon Engine Pack: 3-5 Forgefiends/Maulerfiends
Preferred Enemy, Can use a Warpsmith's WS and BS

The Hounds of Huron: 1 Lord, 5+ Biker Squads
Can charge after turbo boosting

Maelstrom of Gore: Lord or Kharne, 8 Khorne Berserker units
Gives fleet and move through cover and adds to charge moves

Trinity of Blood: 3 Khorne Lord of Skulls
Rage, Wounds in the World