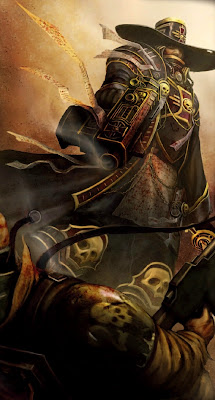 You heard that right. It appears one of the biggest surprises this year is not going to be the re-release of Bloodbowl, but something that is much more insidious.......Warhammer 40k: Inquisition.


This will be a skirmish sized game of 5-10 models per side, and may end up becoming more than a limited edition run. It seems that seeing all the skirmish sized game out there, Games Workshop is capitalizing on their 40k universe and peoples drive to want a smaller game. Rather ingenious if you ask me.

Definitely if a game like this was the same scale models as 40k, and was expanded upon as more than just a limted release, count me in. Might have to count me in regardless.

Please remember that this is a rumor, some salt is always required. This breaking rumor comes from TastyTaste and more can be found here on his site.
http://bloodofkittens.com/blog/2013/07/15/rumor-it-blood-bowl-come-inquisition/

via TastyTaste on Blood of Kittens
GW is about to enter the skirmish scene with the release of
Warhammer 40k: Inquisition

Inquisition is designed for 2-4 players and each side will use custom cards and dice. Army sizes consist of about 5-10 models per side. A whole new set of models drawn from Blanche artwork will accompany. The game should be flexible as you can make and design your own Inquisitorial retinue. As for rules complexity that is anyone's guess, but the general marketing goal for Inquisition is a gateway game into the greater Warhammer 40k universe.

Beyond that GW, seems to be taking cues from Kickstarter projects like Sedition Wars and home-brewed rules like Inq28 for Inquisitor. This also might not end up as a limited edition run, but that all depends on sales, and if any support is continued will be done through digital expansions and updates.
7/16/2013
Natfka
News Headlines