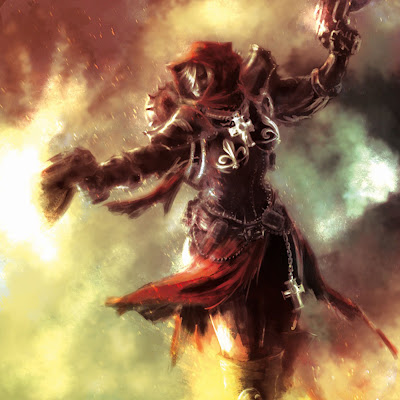 Sisters of Battle are getting a codex. What is it and how will it look is still a ways out. I have been hearing an occasional whisper or two on what is coming. Here is a brief on what I have been hearing over the last few months. But wait, there is some new hints of Sisters of Battle that were suggested over at the Enter the Citadel event. I have those listed here as well.


Sister's of Battle
From Various Sources and a lot of speculation
*They are not being dropped. They are getting their codex.
*There was some model design issues (common knowledge) from some time ago
*The army is currently not up to 6th edition standards, and needs to be fleshed out a lot (more units variability background etc)
*The codex was being worked on at one point, and stopped.
*Whispers of an Inquisition codex may have some bearing on this codex. (like moving from Daemonhunters to Grey Knights)

Recent Sisters of Battle News
via Enigwolf on dakka (thanks for the links)
I attended all of the Design sessions and because there weren't many people around, I manage to have very good, long conversions with Phil Kelly, Jervis Johnson, Guy Haley, and Jes Goodwin. I asked almost all of them about SoBs, and from the sounds of it it's not in the pipeline anytime soon. However, Phil Kelly has expressed interest in it, although he really wants to work on the IG 'dex because there's a certain "human" element to it missing from all the other races. He also mentioned that there are 3 Citadel Designers who have full SoB armies as their main army, and reassured me that they're still around. It's apparently also hard to "get rid" of a dex's contents once introduced, so no fear of Codex: Black Templars, etc. becoming a supplement. I prodded him more about how Witchhunter and Daemonhunters became Codex: GK, and he told me he wasn't involved in that, but it was an oddity within the office.

Oh yeah, one last thing about the Sisters of Battle. According to Phil Kelly, the reason why they never got plastic minis was because they couldn't be plastic moulded by the current process. He wasn't really sure what the issue was, but there was something about the sculpt which meant that it could only be cast in metal. Presumably this led to declining SoB sales and a lack of development in them as a result.
7/16/2013
Natfka
40k, 6th Edition, Rumors, Sisters of Battle, Warhammer 40k