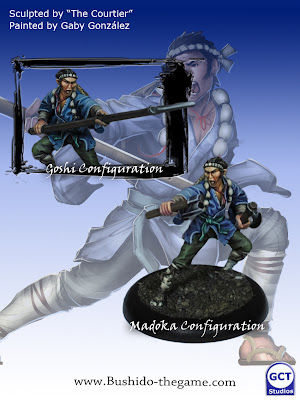 The latest release from GCT studios for Bushido is pictured above. I have only gotten in a couple games of Bushido since I received the game, and I need to get more games in. Bushido has a very unique and tactic oriented combat system, that if you have not seen before.... just follow the link.
http://natfka.blogspot.ca/2013/07/bushido-unique-combat-system-and-pre.html

In times of war the Prefecture of Ryu is able to call upon those loyal to their Takashi Lords, swelling the ranks of the serving ashigaru with Goshi. Madoka wields his long axe in the name of Ryu, hacking down foe with sweeping blows; his courage in battle is soon restored in the presence of a trusted commander.
7/31/2013
Natfka
Bushido, News Headlines