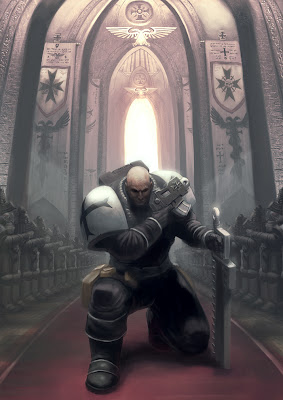 This morning we have a second batch of Black Templar rumors to take a look at. Some of this should help clarify what it is that we are looking at, with the focus here on Neophytes, Initiates, and Castellans.


Please remember that these are rumors, and come from a good source. I apologize to the readers and the source, for last time not noticing the autocorrect sections from part 1. Sloppy on my part, as I read right through them.

Remember also that this is all from an earlier playtest set, but gives us the direction and flavor of what it is that we may be seeing in the future.

If you missed part one, here is the link
http://natfka.blogspot.com/2013/07/black-templar-rules-neophytes-vows-and.html#more

Neophytes:
Scout Stat line.
They do not take up a force organization slot, but count as troops for all intents and purposes (Scoring etc).

They do not have infiltrate, or move through cover.  They also are not subject to rage after taking a casualty.
The number of Neophyte Squads you can take equals the number of Initiate, Assault, Bike and Sword Brethren squads total you have in the army.

Sword Brethren Terminators do not increase this limit.

Once purchased, as a 5-10 unit choice they are their own selection.

When deploying Squads with the Crusade keyword (Initiates, Assault, Bikes) you can attach a Neophyte squad to it.  This then becomes one unit for all intents and purposes for the remainder of the game and cannot be split.

If the squad numbers 5 models, Neophytes can buy Bikes.  They cannot buy jump packs.  They come with bolt pistol and CCW and they cannot take special weapons.  Those on bikes can upgrade to grenade launchers though. Neophytes can take shotguns

If you don't want to attach them, you can just deploy them as their own unit.

From what it seems, you can put Neophytes with bikes into squads without bikes, and vice versa.


Initiates:
Initiates have the stats of a basic marine, except their BS which is 3.  It's +1 point per model (and the whole squad has to buy it), to get up to BS  4.  For 1 more point, you swap their chainsword for a bolter.  They are 10-20.  Only assault special weapons (meltaguns, plasmaguns or flamers) can be taken.  No heavy weapons.  Instead of assault weapons they can take power weapons.  They can replace both their BP and CCW for a Heavy Chainsword. They do not have sergeants, and are leadership 8.

Yes it's possible to take 20 Initiates and 10 Neophytes it seems.

Castellans:
Castellans are a 0-3 per slot elites choice.  They are independent characters and take on vows that are reminiscent of oaths of moment from the books.  Things like taking objectives, or defending them till the end and confer that benefit to initiates (or better) that are in the same squad as them.  They can't take more than one vow and vows have different point costs.  They get access to all sorts of interesting wargear, and unique wargear.  They do not have to take wargear or vows, and are more expensive than a wolf guard, despite having the same stats.  They are leadership 9.

This playtest set is incomplete and out of date, but since it's only one version out, it should be pretty close to what is currently being used.