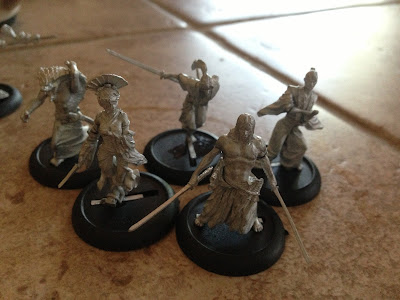 I was able to get my first game of Bushido in the other day, and it was a lot of fun. I will have to say that I very securely got my butt stomped, but here is my first look into the game.

The Game (Combat)
It was the first game for both myself and my opponent, so we spent some time with the book open double checking rules and both feats and traits. However the game still was relatively quick and the core concepts of the games easy to grasp. I think a second game would of been more tactical, but we were interested in getting these rules down, so my poor Ito Clan jumped into a swirling melee, and had a hard time getting through the heavy armour of the Ryu warriors.

At fist glance, and after reading through the rules, the mechanics of the game appear to be rather complex. This really breaks down to the combat system being something entirely new, as once I had it figured out, it was rather easy to work with.

Bushido is a game where you literally trade blows with your opponent, and you get decide for your heroes whether or not you will be going all out on the attack, or saving some dice to defend yourself. So striking and counter striking in the game are very important, its not just a Weapon Skill vs Weapon Skill game. This is one of the games strengths, as it brings a level of blow by blow, defend, parry, feint, throw and more every action of the melee. Even using your ki powers to hopefully throw the dice in your favor, or ganging up becomes important.

This is done each melee exchange by each hero dedicated part of his dice pool to either attack or defense. It becomes important to defend, because if you go all out on the attack, and your opponent defended enough to survive, and yet throw a dice or two into attack; the counter punch is going to hurt.

For example,
My hero has 4 dice for his dice pool for a melee exchange with his opponent, while his opponent only has 3. So I dedicate 3 dice for my attack and put one towards defense. My opponent only having three dice, but wanting to try and get a chance to hurt my hero, dedicates two dice to his defense (relying upon his armour hopefully), and puts one dice into the attack.  Since I am the active player and have initiative, my attacks are dealt with first. I roll and the result is a 7, and my opponents defense roll comes to a 6. A success of 1, and rolling for damage means I am unlikely to hurt him, and a quick check on the damage chart, shows 2 damage, which is absorbed by his armour.

Then my opponent rolls his single attack dice, and I roll my single defense dice. here he rolls a 6, and I defend with a 3. He was able successful by 3, rolls high on his damage, and damages my hero.

I will be doing a video here soon on exactly how combat works, so that someone getting into the game can see it first hand. Much easier than trying to learn it from scratch, as this is an entirely new combat system for a tabletop game.

Overall I enjoyed the game, even though I just could not get through the armour of my opponent time and time again. Of course we were learning the core mechanics of the game, and I was not using the poison abilities of the Ito Clan the first couple rounds, nor were we good at using our traits or feats.

I will go over the game a more in-depth when I get the chance. I have to take a personal day today (family), and will be back tomorrow. (this post was scheduled out in advance).
7/19/2013
Natfka
Bushido