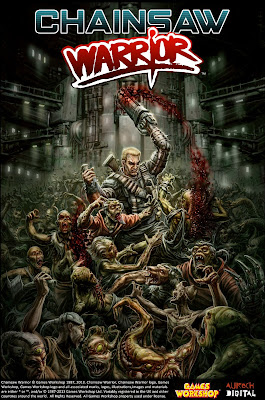 Chainsaw Warrior is an single player board game that was released back in the early 80's by Games Workshop. Following the recent trend of GW spreading out its licensing, Chainsaw Warrior is back, and is being produced by Aurochdigital.


This is an official release publication for the game. Definitely something to look into as the release date is coming sometime around the end of summer, for iPad, iPhone and Android. The PC and Mac versions will follow soon after

via Aurochdigital (official announcement)
Games Workshop's 80s Classic Chainsaw Warrior is Back
Auroch Digital is an indie development studio based in Bristol Games Hub. There is more information on them here: aurochdigital.com

22nd July, 2013, Bristol, UK: The seminal hit board game Chainsaw Warrior, made by Games Workshop back in 1987 is set to return this year in a digital form. The original 80s game was a notable rarity in that it was a solo board game that pitted the player not against others but against the clock. The game saw New York balancing on the precipice of darkness as twisted forces from another reality attempted to rip the city from this world into theirs. Standing between them and the destruction of the city was a lone figure, the brutal and mysterious Chainsaw Warrior. As the eponymous hero, the player had to delve into a zombie infested New York tenement to locate the source of the evil spewing through the spatial rift and destroy it before he was destroyed. The game is being created by Bristol based indie developer Auroch Digital for mobile and desktop platforms.

Auroch Digital's Design & Production Director, Tomas Rawlings explained why they are resurrecting this mutant and zombie infested classic; "It's a game I played as a kid and loved. I see it as the pre-cursor of First Person Shooters when video games technology could not really do the first person or the shooting. For me this is not only a great game, but a classic of board game design - a solo shooter that really challenges the player. When we spoke to Games Workshop about developing a game this was the top of my list. I loved the 80s style of the game and we've kept much of that in our design as well as faithfully translating the gameplay. Don't expect to win the game easily. This was the Dark Souls or Super Meat Boy of its day. Players didn't want to buy the game and run out of challenge at first play. The game has many ways to kill you and is unafraid to use them - which makes it all the sweeter when you finally win."

As well as its challenge, it also flies in the face of current trends in social aspects in games. Chainsaw Warrior is firmly an individual experience, Rawlings explains, "This is about you against the tide of darkness. Chainsaw Warrior is the last hope for the city and time is running out. Ultimately I wanted to make this game because it is one that needs to be brought to digital with all guns blazing and chainsaw-blades revving, and that is what we're going to do!”

“Chainsaw Warrior is a classic fantasy solo board game experience that established itself as one of Games Workshop’s best sellers from that era of our history” said Jon Gillard, Games Workshop’s Head of Licensing. “It was actually the first game I bought when I joined the company, and like many other enthusiastic gamers, I enjoyed playing it for years. We can’t wait to see it being brought to a whole new generation of digital gamers who can enjoy the dramatic struggle against seemingly unwinnable odds, as well as the remorseless ticking of the clock.”

The game is due to release on iPad, iPhone and Android at the end of summer at a price point and date to be announced soon. The PC and Mac versions will follow soon after. To keep in the loop with the project you can like Auroch Digital on Facebook or follow them on Twitter. The game's information page can be found at chainsawwarrior.net
7/23/2013
Natfka
News Headlines