Tau Mercenaries and The Expanded Empire. 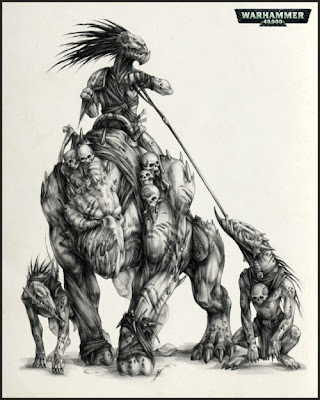 This last week we had been talking a lot about Tau Mercenaries which is based off of Kroot and possibly Vespid (unclear still at the moment). Then yesterday we had a very reliable source kick in and inform us that yes, Tau Mercenaries are in the line up, and that yes, another supplement beyond even that for Tau.


if you missed the rumor, and want more, here is the link
http://natfka.blogspot.com/2013/07/faeits-rumor-tarot-breaking-rumor-cult.html
Tau have two more books; one for kroot and one for "the rest" of the expanded empire.

There is the possiblity of another supplement as well, but for now we will leave that out, and concentrate on the rumors from our reliable rumor checker.

Tau Mercenaries
So what rumors do we have that give us information on what this might mean? Obviously it will focus on Kroot, and possibly Vespid, giving us HQ options, wargear, new army rules. There is a good chance that we will see Tau Mercenaries in 2014, could it bring a new model or two?

This will be a big release for the Hobby, as a kroot codex is something highly desired by a good section of our hobby.

Recent Whispers
My best guesses are a plastic pack kroot hq, which I saw in design before. This would be a slightly bigger kroot than the current troops. Had a tau rifle, not a kroot gun. A bit more armor than a standard kroot. Standing on a rock in a "crossing the Delaware" pose. Caveat that this was still in CAD, lots can change, and it was last fall.

Also a vespid plastic kit thats been ready for a while.

Some old Past Whispers
1. Kroot HQ is in the works!

2. Kroot to get own transport

5. Vespids reworked and getting a Heavy unit

Some Older and Speculative Whispers
Vespids get two slots (unknown if this is an additional two, or two overall). Kroot get an additional unit


minor psychic powers for Shapers or Shaper like character


Tau Expanded Empire
Now this supplement is intriguing because I do not know where it is going. Could it actually include the Demiurg? Human Conscripts? or is it just another part of the Empire and will be Tau centric. This one is still so far out, and unknown that really speculation is all we have beyond a temporary title that we can use for reference. Tau Expanded Empire.
7/29/2013
Natfka
40k, 6th Edition, Rumors, Warhammer 40k