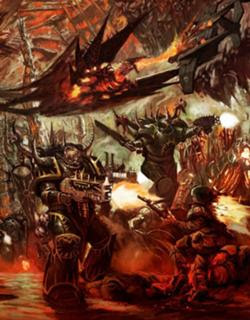 The Black Legion may very well be the first Chaos Space Marine codex supplement, and not too far out from the sounds of it. This is exciting, as they were the Luna Wolves before the Heresy, and is a legion with a very rich history.


Please remember that this is a rumor

via Best_Pone on Warseer
Black Legion are Coming!
So, I've heard from a little birdy that Black Legion will be getting the next supplement. No idea if that will be August or not though, seeing as August is a WFB month.


Who is the Black Legion?
via Warhammer 40k Wiki
The Black Legion is a a Traitor Legion of Chaos Space Marines that is the first in infamy, if not in treachery, whose name resounds as a curse throughout the scattered and war-torn realms of humanity. The Black Legion was one of the 9 First Founding Legions of Space Marines who turned Traitor to the Imperium during the Horus Heresy in the early 31st Millennium. The Black Legion became the primary instrument of its Primarch, the Warmaster Horus, to overthrow the Emperor of Mankind and seize control of the Imperium in the name of Chaos.
7/11/2013
Natfka
40k, 6th Edition, Chaos Space Marines, News Headlines, Rumors, Warhammer 40k