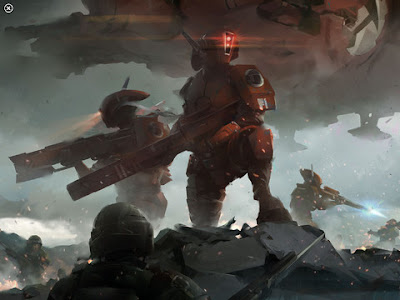 Of course I am still going to wait for the hardcover on this one to pick it up. There are a lot more supplement info coming, its going to be fun.

A huge thanks to one of our readers for helping us stay on top of this.

via an anonymous reader here at Faeit 212
I have some clarifications regarding the farsight book as some info posted was wrong as well as some stuff that hasnt been posted yet.

all xv8 crisis teams are troops instead of elite. you have to take at least 1 unit with 3 crisis (not including drones)

units in a farsight enclaves army that can take the bonding knife ritual special rule must do so.

warlord Traits:
1: the warlord has WS 5 if he is not equipped in a battlesuit he has to reroll the result.
2: the warlord has one of the following special rules: counter-attack, furious charge, monster hunter, stubborn or tank hunter.
3: one use only. at the start of the opponents turn you can declare this warlord trait, if you do so the enemy has a -1 modifier to his reserve rolls he makes this turn.
4: the warlord has  the fearless special rule. all friendly units of codex: tau empire within 6" have the stubborn special rule.
5: crisis teams have a +1 modifier to their reserve rolls
6: one use only. declare this warlord trait in one of your shooting phases. if you do so the warlord and his units weapons have the shred special rule.

the signature systems are true in the rumours. except for the fusion blades: