New Fortifications and What They Are. 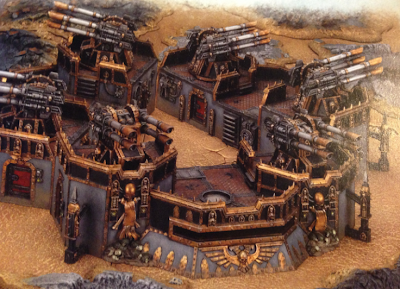 The new fortifications that just came out have the rules for both Apocalypse and standard 40k in the box. Reports are now coming in about exactly what these things are. So here is what is being said.


It looks so far that Firestorm Redoubt cannot be manned, and if this is true this fortification will have some issues being part of the game. (my first impression of unmanned BS2 guns is not very high).

Firestorm Redoubt
Classification: Medium bunker [STANDARD FORTIFICATION]
Cost: 2x Thunderfire Cannons
AV: 14
Access Points: As modeled (3)
Fire Points: 1
Rules: Medium sized Bunker, and two quad lascanons. The quad lascanons are 2 shot linked Icarus lascanons. They are able to independently fire and are not target-able separate from the redoubt, however they are always fired automatically, (BS:2 CANNOT be manned) however they automatically fire at the closest flying monstrous creature or flier if one is available.


It looks like the Vengeance Weapons Battery is very usable, since from what I have seen it does not have to be on auto fire.

While right now we are relying upon peoples reading of the rules, I am very interested in seeing a pic of each set that is clearly readable. (ive seen ones that are not very clear or page is turned so you cannot read the entire page.) These fortifications are something I am interested in getting, but wont go down that road until I know more about them.