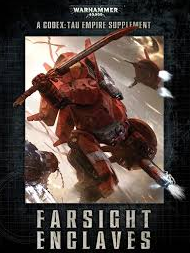 A Tau codex supplement, Farsight Enclave is now available digitally, and even though the hardcover version is not going to be available until October, the rules have been all over the web now for the last 24 hours.


I have read over these several times now, and while very nice and flexible, I do not have an opinion of how useful they will be yet. There are several items and wargear that are very good, but also very expensive point cost wise. Also in there but not listed is that the Farsight Enclave can be used as a battlebrother ally to the Tau codex, and vise versa. This is cool, as it leads us down a road to a precedent for the future that we are looking forwards to. This allows for some very cool flexible list building options.

I have another Tau release rumor coming at tomorrows Faeit's Rumor Tarot. Something looks like its on the horizon......

COMPATIBILITY:
This eBook digital edition is compatible with most current generation mobile devices, tablets and eReaders including Android, Kindle and iBooks devices.

Rules
These are brief a brief overview, and not all the rules included in the supplement.

via Kirby over on 3++ (More is over there including pics)
6 wargear options IN PLACE OF TAU SIGNATURE SYSTEMS
CAN NOT ethereals, aun'va or shadowsun
Crisis are troops
preferred enemy orks in combat
Everyone that can take Bonding Knife Rituals MUST take them
Riptides can take signature systems from the farsight enclaves list

seismic fibrillator node
- one use only
Roll a d6. on a 2+, all open ground within 36″ is treated as difficult, all difficult is treated as dangerous.
roll d6 at the end of each turn. 1-4 the node's effects stop. 5+ they stay in play.

warscaper drone
- nominate a drone purchased by the character – this is the warscaper AND the original drone type.
All models in the same unit have move through cover, outflank and acute senses.
enemy unit that is both outside of it's deployment zone, and within 12″ of a warscaper treats difficult terrain as dangerous.

earth caste pilot array
The model re-rolls all rolls of 1 to hit in the shooting phase.
May also re-roll the dice when using a nova reactor.
Weapon skill is also reduced to 1.