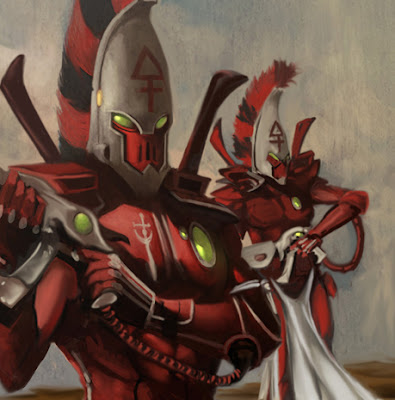 Codex Supplements have taken us by storm, and I truly believe that everyone is just dying to hear any information on whether or not their army will get one. Well, when it comes to Eldar, there are two more on the way.

via Stickmonkey on Faeit 212
I'd heard Biel-Tan was being worked on after Iyaden, and Saim-Hann was later.  But from what I've heard lately it seems the supplements are pure labors of love, and not necessarily slotting into releases like we've traditionally thought.  That they are following a "when it's done" release scheme, and not strict deadlines.  Multiple digital supplements in a month would also not be unheard of.

There is a lot going on.  I've heard scattered rumors of 2014 seeing many new models introduce to codexes with rules in box, but I haven't confirmed this.
7/24/2013
Natfka
40k, 6th Edition, Eldar, Rumors, Warhammer 40k