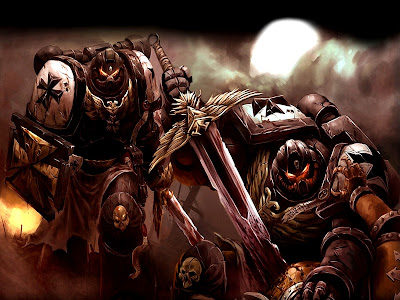 The last few days there has been a lot of talk about the Black Templar getting their own codex. This stems from recent talks at Enter the Citadel where they are getting their own codex, and sources here on Faeit 212 that suggest that the codex might be coming at the end of this year. Now we have a few army details emerging.


Please remember that these are rumors. These come from a solid source that has been correct here on the site before, not to mention has helped us in the past weed out a couple rumors. So hop on board, and check out the latest bits on the Black Templar. These are an early look at what we may find in the codex. The codex is still months out at the least.

via a good anonymous source on Faeit 212
In so far as Black Templar: They are getting a full book not a supplement.  The direction of the book is on "crusades," and differentiating the Black Templar when they persecute Xenos as opposed to when they put the Witch to the sword.

They are seeing a lot of changes from their previous incarnation, and are no longer a shooting army (despite the intention of the previous book, they were received as a shooting army).

The army will have a "knights in space" kind of feel with wargear being a very big importance for the characters, and vows similar to old bretonians.  The struggle there is with book keeping, but it is a pretty cool concept.

Crusade squads with their hybrid neophyte and space marine combinations are gone.  Which will probably anger a lot of people without pleasing any (since in the past you could just take 0 neophytes so in essence this is just removing choices), but take it for what it's worth.

The whole "move after taking casualties" thing is gone and has been replaced with something more similar to battle trance (but less swift, and more assault oriented).

Templar point costs are down even from those of dark angels, and are designed to be balanced by their point cost, but also deliver the feeling that this is a "crusade army" that has never really felt the yoke of the codex astartes, and thus has huge companies of marines.
7/16/2013
Natfka
40k, 6th Edition, Black Templar, News Headlines, Rumors, Warhammer 40k