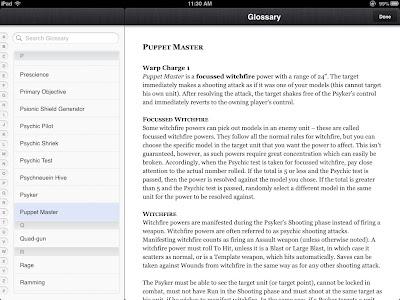 For others like myself, the app is not a rulebook, codex, or even a supplement (all of which trump an app), so something different on it must have been a mistake or is incorrect. Either way, it is very much a slam dunk, as the digital rulebook is the same as the hardcover paper version and no faq or errata has addressed it.

Now we are talking the rules RAW, because to be honest, when it comes to a tourney, RAI really does not matter.

Thanks to The Harrower for sending us a screenshot of the glossary page regarding the rule as it is shown.

If you were unaware of what the issue was, here is what the problem is or was from a previous post. Of course there is also the issue of can puppet master deactivate shields to fire them?