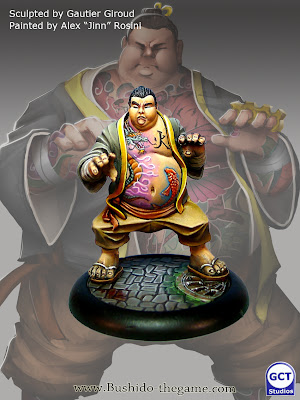 Bushido is a Oriental Fantasy Skirmish game, and today we get look at a couple more of its models that are about to be released; Manu and Jun. These models are getting released on August 15th. 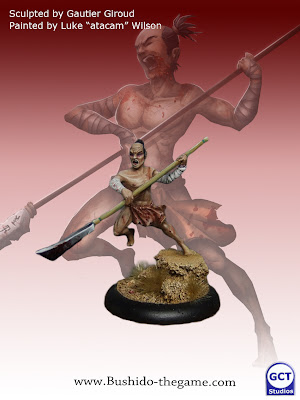 via GCT Studios
Manu - Silvermoon Trade Syndicate
This giant Buto is the personal bodyguard of Harukichi and was selected for obvious reasons. His prowess in the Jumo arenas quickly attracted attention, it was clear to most he was destined for a top position within the Syndicate, and he has not disappointed. Constantly vigilant to any threat, and unshakeable in his devotion to the defence of his Oyabun, Manu has continuously put himself in harm’s way, catching most would be assassins off guard with his prowess in melee, deftly blocking blows until his master is safe, then and only then the time comes to crush bones with fists the size of mallets.

Jun, Oni slave - Savage Wave
Those who taste the blood of a demon are driven mad by the raw alien power coursing through their veins, warping their senses and souls. Jun was already mad. An evil and impure man the Oni’s mad dog to set upon their enemies, savage and loyal to his masters he will do anything for the next taste, putting himself in harm’s way without a thought for his own safety.