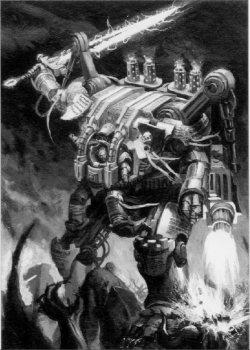 We have had an abundance of Black Templar rumors from an old playtest set of late. Well, one just about slipped by me, as it comes from somewhere else, and I was working on seeing if there was anymore information on this.

Posted earlier
via an anonymous source on Faeit 212
There's a new Space Marine kit that is akin to a dreadknight.  Has several weapon options.  Monstrous Creature, somewhere in between dreadnought and dreadknight.  Gets a gun and a weapon. Several options. Presumably BT would get a variant?
7/25/2013
Natfka
40k, 6th Edition, Black Templar, Rumors, Warhammer 40k