Codex Supplements: The Delay Between Digital and Print 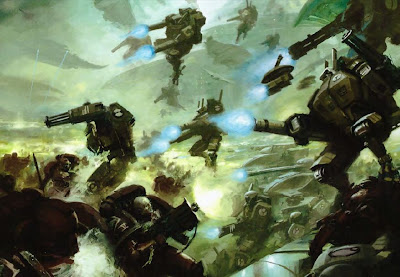 Last week we were talking about the delay between digital supplement releases, and the hardcover version. The Tau Farsight Enclave is not supposed to hit hardcover until October, and there are many reasons for this. This should clarify some of the confusion.


Previous post on the same subject as part of the same discussion. (also printed out below)
http://natfka.blogspot.com/2013/07/farsight-between-digital-to-hardcover.html

via an anonymous source on Faeit 212
GW uses a third party printing company. They are bringing on board a second printing company to do soft covers. They don't want different companies doing the same book or even the same type of book for consistency purposes.

There is a backlog (not to say they're behind), but to say that there is a printing priority and sourcebooks don't bump out codexes.

Instead, during a lull multiple sourcebooks will get printed since they're done in lower quantities.

Some of these will be catch up, some right on schedule and some Pre-printed for later release.

There's no intention on digital only sourcebooks, it's just a desire to release farsight now despite the book not having been printed yet.

It also means if any first day changes get made, the printed version will include the revisions.


Previous comments
via a solid anonymous source on Faeit 212
As for the delay between digital and print:

It's to due with a physical production backlog.  The current printers used can't actually keep up with the volume of production needed.

Codexes take precedence over sourcebooks.  The idea existed to simply wait on sourcebooks, but realistically there's no gap large enough between top tier releases (army books) to squeeze them in.

Instead, the Digital model helps in two ways.  First, it lets people who want it get it as soon as it's ready.  Second, it let's GW coordinate the releases a lot more smoothly until a second printer is acquired (as is the case with the softcover books, they will be coming from a new printer).  Third, it alleviates some of the production stress since people are less likely to buy a hard copy for something they have a digital copy of.

The idea of cross-platform, cross-media production of the same book is not a money grab.  GW of course doesn't mind if you buy the interactive book, the ebook and the hardcover, but it's not the goal.  The goal (much like the LEs) is to provide "something for everyone," no matter what your taste is.

So the Digital will come out when it's ready or when it's timed properly, and hopefully the print will line up, but Supplements aren't about to bump codexes behind since that would upset more people than it would please.

In the future, expect the releases to be a lot closer to one another and eventually sync up within a week.