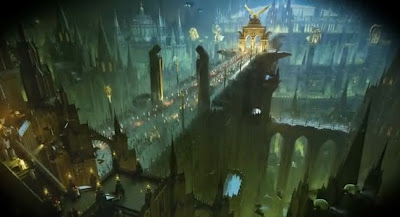 
Hopefully we get to the bottom of this, and this settles it. Or we just wait a couple days and then we are set.

One note on this subject... I beleive that you do get non-puchased powers as well when you decide to get the new powers out of the 6th ed. rulebook. I think you are only swapping out powers that you would purchase. (we shall see soon). For example, a Grey Knight Librarian.... like in the battle report, gets his hammerhand, but not any codex purchased powers if he decides to get ones from the rulebook.

via pingualoty
•The new psychic are INSTEAD of the codex powers not in addition. You use either or.

•If you opt for the new ones you choose 2 disciplines that you can have, any combo, before deployment.can anyone confirm that you ROLL for the powers after choosing your 2 disciplines, or can you cherry pick which powers you want?


•The objective dice are "a means to represent the place or the importance of the mission objectives of primary and secondary scenarios used in the Eternal War. Also, be used to determine the nature of a mysterious Objective once revealed."


Thats the best we can gleam right now,confirmation of secondary objectives and also mystery ones. Also seems AP1, 2 and 3 have different effects on vehicles and of course hull points are in, though they only give you 2 dice for that.

Codex: Sisters of Battle
- NONE

There are 5 disciplines in total and 6 powers per discipline. Even though they say there are 35 cards in the deck so i have no clue what the remaining 5 cards are for. It doesnt mention them, and it seems that the psychic cards are NOT required to use these powers but rather it is a physical 'reminder' of which powers are being used in the current game as it seems they can be chosen during deployment

You'd have to exchange all your powers for them it seems, even though it seems to apply differently depending on the codex as they showed two different examples with blood angels and chaos deciding their powers differently.