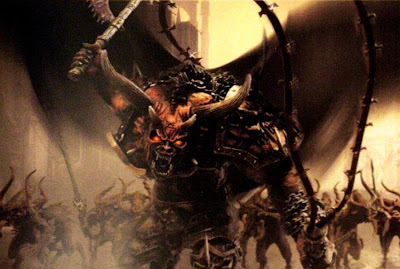 The Daemons are massing, as we are looking forward to a release next summer. Could a codex be coming?

Added to this rumor I have put stickmonkey's latest as well, as the following rumor by theDarkGeneral loosely correlates with the time frame for a Chaos Daemon release.

via theDarkGeneral
Along with Daemon Engines, and a broader spectrum of vehicles for Chaos! Next Summer I believe is when the new Greater Daemons will be done and ready for release! (along with new Codex/Book)

via Stickmonkey
Maybe a little surprise here too...
Plastic GreaterDaemons are done, rumored to have pieces to build named Greater Daemons as variants ( though not expected til 2013)
6/10/2012
Natfka
40k, Chaos Daemons, Rumors, Warhammer 40k