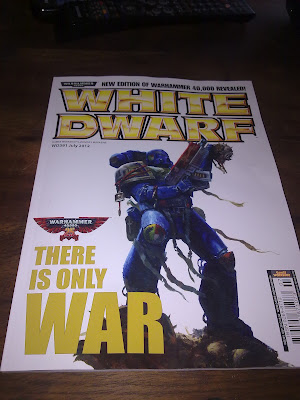 I feel like I have read this thing already, however we are still getting new bits and pieces. It looks like however that quite a few people already have the White Dwarf, and we are getting down to the details of what is in there.

Once again, there is a lot of information that has been repeated here, however, there are again some bits I had not yet heard.


via Metallicarule from Imperius Dominatus
Quick rundown:
The new books look beautiful, full colour and the various photos of the pages throughout the magazine look really nice, can't wait to get my copy. As you have probably guessed the front of the magazine is very product heavy.

There is a very basic overview of how the new rules will influence each army, looks like even Tau get a boost ;)

Two battle reports one involving the flyers and the other is Imperial Guard/Grey Knights vs Chaos Space Marines/Daemons. I'm looking forward to reading this as it showcases the much rumoured allies. The game is 2500pts with around 1750 spent on the main armies and 750pts spent on allies. Interesting things I've noticed are that allies use a small foc and it appears that fortifications are purchased with the ally points allocation, a bastion with quad laser is 125pts.

There is an article giving brief details of what psychic disciplines each army can take and how many powers their psykers can take. Powers from codices are still usable but unfotunately you can't mix and match, you either take codex powers or use new powers. Most psykers can take 1 or 2 powers, extremely powerful psykers can take 3, Eldrad can take 4!

The main batrep keeps score with Victory Points so it looks like Killpoints are a thing of the past, looks like my 60pt Dire Avenger squad will no longer be worth as many points as a fucking Land Raider...Yay :D

There is a large 8 page article giving an overview to the main rule changes, I haven't had chance to read this yet.

Objectives give different amounts of victory points depending on whether they are a primary or secondary objective.

Before the game you nominate a HQ as your 'Warlord', this model then gets to roll on one of three warlord trait tables, these are - Command, Personal and Strategic.

Hammer of Wrath - Allows Jump Troops to use their mass to deal damage as they land on their enemies.

Overwatch - Allows a free round of shooting if charged by an enemy but with bs1.

Missions - There seems to be a main mission table that you roll for and then the scenario has seconday missions. Different missions have effects on the game such as making fast attack choices scoring - Is this GW's way of stopping spam?

Warlord Trait - Command traits has Inspiring Presence which means units within 12" of your warlord can use their leadership.

New Rule - Interceptor, this gives the ability to shoot at units as they arrive from reserve.

New Rule - Skyfire, this allows the unit to fire at flyers at the models bs instead of bs1.

Sqns - Models in a sqn do not block each others los.

Mysterious Terrain - Archeotech Artefact, when this is discovered every psyker on the board suffers D3 S3 AP2 hits.

New Deployment - Hammer and Anvil, game is played along the long edge of the table (No more putting people by the radiator for Mercer!)

Flyers have to engage hover mode to allow units to disembark. While hovering flyers are counted as a fast skimmer.

New Rule - Multiple Assault, you can charge seperate units but you lose the +1 attack for charging (Fire Dragons say hello to static gunlines!).

If a flyer is shot down units on board take a S10 hit.

New Rule - Overwatch, when a squad is charged they can fire at the assaulting unit but they fire at bs1.

Terrain - Imperial Statues, armies of the imperium within 2" of an imperial statue are fearless.

Terrain - Impact Craters, these grant a 5+ cover save.

Overwatch - Flamers cause D3 automatic hits when firing on overwatch.

New Rule - Snapfire, when stunned Dreadnoughts (possibly all walkers/vehicles) can snapfire at bs1.

New Rule - Ongoing Reserves, flyers can leave the board and be placed back in reserve, they then roll their reserve roll as normal.

Flyers - If a flyer is destroyed the wreckage can land on top of units and cause damage.

And that my friends is that, White Dwarf has been an interesting, if a little vague, read this month. It has done its job in getting me hyped for 6th :D
6/22/2012
Natfka
40k, 6th Edition, Warhammer 40k, White Dwarf