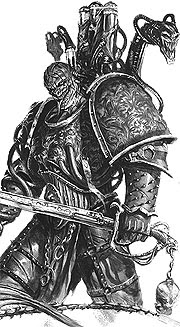 Lucious Eternal and Defilers are the headlines for today's Chaos Marine rumors. Lucious looks like he will be on a table top near you very soon, while Defilers look like they might be getting a fresh breath of life put into them. Enjoy.

Please remember that these are still rumors, and to take with a grain of salt. I did include a few more things I was told, but that have already made the rumor rounds (Typhus and Cover Saves).

Typhus does give FNP to Cultists and they are fearless when upgraded to zombies.

Some usr names in the codex are "strike down", "blind", and "un-weilding". these are in chaos marine entries, with rules in the main rulebook

There is a usr called "invisibility" that seems to have an affect on targeting a the unit and also effects assault.