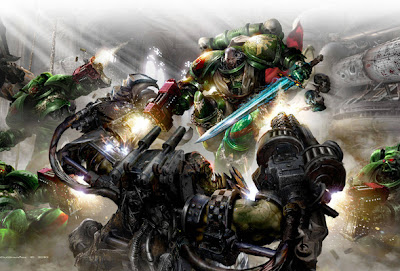 Please remember that these are rumors, and to always take them with a grain of salt.

via Harry
I have said all along CSM will be the first codex of 6th edition.

I will now put my head on the block and say I think Dark Angels will be the second. (despite the fact that I have not heard a thing about models for them).

I have thought for a while that Tau would be first Codex of 2013.

I guess that depends a bit on when CSM / Dark Angels appear....

(... and I have already said there are some Deamons coming and some more flyers).

Dark Angels I have not heard a thing about until last week when I hear from two different guys in the same week that they are up next after Chaos.

Harry has previously said that Tau were to be the first codex of 2013, and we have heard over and over that there would only be one codex next year. So somewhere between CSM and Tau, expect to see a Dark Angel codex. Whether that pushes or pulls anything else around, I don't make the paygrade to divine the truth.
6/08/2012
Natfka
40k, Dark Angels, Rumors, Warhammer 40k