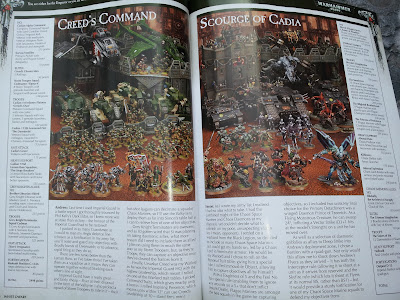 The 6th Edition information just comes too fast to get it all posted up. I am doing my best, and here is another large batch of information, which looks to be based off the White Dwarf. Stay tuned, there are a lot of posts lined up...


Aegis Defense lines are one of those pieces that are looking sweet. The rumors have them at 50pts, 4+ cover save, and a 2+ if you go to ground..... Can you say guardsmen with orders?

As far as allies go, whoot! It seems 1 HQ + 1 Troop opens up 1 from other slots. Very exciting things coming. I just love the pics above.


via paultwilson
Further reading says that they have expanded the FOC so I would guess they've added allies and fortifications to that as an extra bit.


The highest LD HQ is the Warlord and gets to roll on a Warlord Trait table, before the game you roll on one of 3 tables - Command, Personal or Strategic Traits, 2 examples are Inspiring Presence; Units within 12" use the Warlords LD. Another is Immovable Object allowing the Warlord to capture objectives solo.


Monstrous creatures get the Smash ability which allows them to halve their attacks but strike at double strength.


Bastions have AV14 all round and have a heavy bolter on each facing, they're automated and target the nearest enemy unit, can have a comms relay or a heavy weapon on the battlement.


Tank traps are impassable terrain to all non skimmer vehicles, bikes can attempt to pass on a successful difficult terrain test, models behind it can get a 4+ cover save.


Aegis defence lines are a 4+cover save but models behind it get +2 to cover save if they go to ground behind it.


Mysterious forests are 5+ cover save, as soon as you enter you roll on the table to see what happens.


Ruins are difficult terrain and a 4+ cover save.


Wild undergrowth is a 5+ cover save and difficult terrain.


Imperial Statuary is all imperial models within 2" of the terrain piece are fearless.


Fuel Reserves 5+ cover save, each successful cover save roll a D6, on a 1 a barrel explodes doing a strength 3 hit on any models nearby.


Impact craters are a 5+ cover save if the unit is within it's boundaries.


Do have some more snippets from random boxes and stuff...
HQ's can challenge in single combat,


Rage is +2 attacks on the charge


There's a pic of a Beastman Imperial Guardsman "A type of abhuman designated Homo Sapien varatius in the rulebook's appendix,


Snipers can select targets if they roll a 6 to hit,


Gauss weapons remove a hull point on a hit of a 6, tesla works with the overwatch (needing 6's to hit at BS1) nicely (any sixes to hit are 2 hits),


Some Psychic powers marked as number 6 on what I would assume is a random table (looking at a picture of the cards all fanned out, can only see the top card)


Discipline of Divination - Scrier's Gaze, Warp charge 1. Scrier's Gaze is a Blessing that targets the Psyker. Whilst the power is in effect, you can roll 3 dice and choose the result you want when rolling for reserves, outflank or mysterious terrain.


Discipline of Telekinesis - Vortex of Doom, warp charge 2, range 12". Vortex of doom is a Witchfire power with the following profile - S10 AP1, Heavy1, Blast* *If the psychic test is failed centre the template on the psyker, it does not scatter.


Discipline of Telepathy - Hallucination, warp charge 2, range 24". Hallucination is a Malediction that targets a single enemy unit within 24". Roll immediately to determine the manner of hallucinations the target is suffering from (roll once for the whole unit)


d6 1-2 - Unit is pinned, unless it automatically passes pinning tests or is locked in close combat, in which case there is no effect.


3-4 - The unit cannot shoot, run, declare charges or strike blows in close combat whilst the power is in effect.


5-6 - Every Model in the unit immediately inflicts a single hit on it's own unit, resolved at that models own strengths, but using the strength bonuses, AP values and special rules of the most powerful close combat weapons (if they have any)