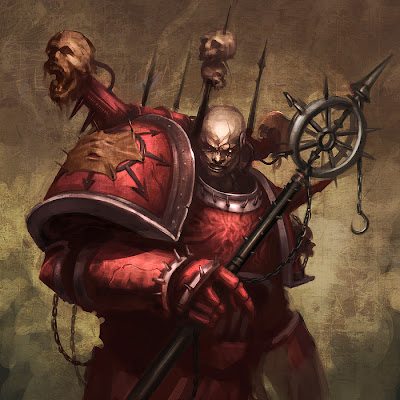 via Darnok
Warhammer 40,000: Rulebook, £45
There is no time for peace. No respite. No forgiveness.
There is only WAR.

In the nightmare future of the 41st Millennium, Mankind teeters upon the brink of destruction. The galaxy-spanning Imperium of Man is beset on all sides by ravening aliens and threatened from within by Warp-spawned entities and heretical plots. Only the strength of the immortal Emperor of Terra stands between humanity and its annihilation, and in his name, countless warriors and agents do battle against the encroaching darkness. Foremost amongst them stand the Space Marines, the ultimate protectors of Mankind.

Across airless moons, within the depths of dark, twisted hive worlds and even in the immaterial realm of Warp space, battles rage that will shape the future of the galaxy forever.

It is a universe that you can enter today, if you dare. But remember that this is a dark and terrible era, and there is no peace amongst the stars...

The Warhammer 40,000 Rulebook is your essential guide to playing atmospheric battles in the 41st Millennium. It helps you field majestic armies of Citadel miniatures across the war-ravaged battlefields of the far-future, in the ultimate contest of strategy and skill.

With 440 full-colour pages, this hardback Rulebook is packed with rich background and contains all the rules for fighting pulse-pounding tabletop battles. The Rulebook includes exciting features such as dynamic close-combat, flyers, psychic devastation and interactive scenery. As well as jaw-dropping artwork, contained within is a history of the 41st Millennium and a richly detailed guide to the races and weapons of the far-future. It also features a comprehensive hobby section to set you on the path to choosing, collecting and building your own Warhammer 40,000 army of Citadel miniatures.


Warhammer 40,000: Psychic Powers, £8
One of the many exciting features of Warhammer 40,000 is Psychic devastation, where Psykers wreak havoc on the battlefield. Psychic Powers is the complete set of Psychic cards, which be used in conjunction with Psychic Disciplines. They make a great accessory to your tabletop games.

This set contains 35 large-format cards and come stored in a plastic fan-opening case, which bears the Aquila. There are 7 cards for each Psychic Discipline, each of which is represented by distinct artwork. There is also an instruction leaflet that classifies which powers can be used by the main Psykers in the Warhammer 40,000 universe.