A Daemon Wave for August: Details 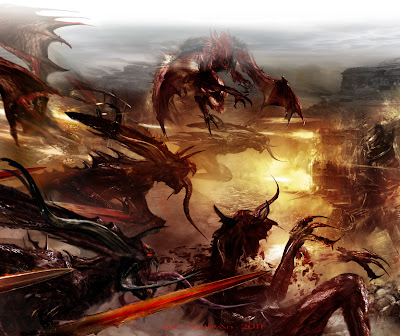 Staring deep into the warp this morning has revealed some details for the upcoming wave of Chaos Daemons that have been whispered about a few days ago. Current rumors say August is the month they will arrive.


I have also brought forth some other sources (that we have already seen here on Faeit 212),since multiple sources have not mentioned Chaos Daemons in our near future.

Please remember that these are still rumors, so always take them with a grain of salt. The rumor mill is in full swing right now, and it is hard to sort out everything on the horizon.
Rumored Daemon wave: August or September

Here are some of the previous rumors, so that we can see them all in one place.
via Whitehat
August is Daemons wave (plastic troops, last two boxes)
Apart from CSM, no more codexes/Armybooks this year

via reds8n
I've heard talk about this wave possibly including something new... which presumably would have rules in WD ( or online ?) or somesuch.

A previous rumor via Stickmonkey
Hearing bits that aside from Plague Bearers, there may be new furies in the works. As well as seeing karanak and hounds of khorne moved to finecast soon.
6/09/2012
Natfka
40k, Chaos Daemons, Rumors, Warhammer 40k