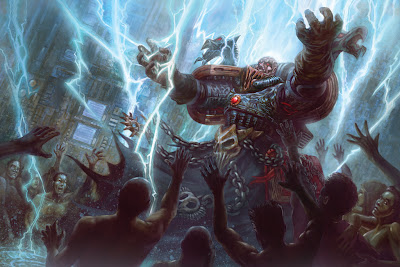 Just in case you cannot get enough.... There is always more. Here is a long set with lots of information taken from our about to be released 6th edition rulebook. There is a lot of good information, so take a look.

via andyc over at Warseer
Dark Eldar Raiders, Ravagers, Razorwings, and Voidravens have 3 hull points, Venoms have 2

Cover saves seem to be taken on a per model basis, so when you get shot you allocate the wounds how you wish, but the cover save is per model, not per unit. The model only needs to be 25% obscured to earn a cover save


You can choose to focus fire on a unit in which case you pick a cover save and the enemy can only allocate wounds against models with that cover save or worse.


Plasma grenades can be thrown


And they shall know no fear breaks all the rules with regard to fear checks, falling back, regrouping.


Characters are not only the independent characters but squad leaders, even monstrous creatures in some cases. All of these characters can issue a challenge and then subsequently be helped out by a stronger character with an intervention


Gargoyles are still jump infantry and subject to dangerous terrain tests, but also get skyhammer


In area terrain you get +2 to cover save


Random game lengths are in, same as 5th


Nightfighting gets rolled for in turn 1 on a 4+. If it doesn't activate then you roll for it again turn 5


Bikes get the skyhammer rule, and get armour saves against failed dangerous terrain tests


Skilled rider gets you +1 to your cover save

to hit chart and to wound chart is like 5th. You can't wound everything on 6's

challenges are made in the fight subphase
issue a challenge like fantasy, only one challenge per combat phase
nominate a guy to challenge
nominate a guy to accept a challenge
if you refuse the enemy can choose one of your characters not to attack this phase
move the guys to base contact
only only challenger and challenged can hit each other
if you only have one character and the other character has a unit as well then there is a bonus reroll for every 5 'spectators'
unsaved wounds add to the overall combat res
they continue to fight, even if a space marine flees and is caught with ATSKNF
glorious intervention allows you to switch characters with initiative test

How I understand it you decide at the beginning of your movement whether the flier is zooming or hovering. If zooming you then turn if you want and move however far you want. You then use those rules to decide what you can shoot and at what BS.

land raider is just tank and transport, no heavy (I was surprised at that)

characters can do precision strikes and choose the model afflicted when they roll a 6 to hit. Independent characters get a 4+ lookout sir to take it on another model.

bikes don't get the 3+ cover save but other than that not much changed. Can move 2d6 in assault phase, still +1 toughness, also get hammer impact hits, cannot go to ground, cannot be pinned. I have a marine biker army so have looked at the bikes quite a bit.

primary objectives are controlled now. one unit can only control one objective (massive change) control is being within 3"

troops are scoring units. vehicles are not scoring and cannot contest (unless stated by the mission)

move within 3" and then roll for it or use your spangly GW dice.
one mission uses the objective dice to assign values to objecitves but you can create the markers yourself

squadrons must stay within 4"
individual models declare flat out moves
shots at squadrons are resolved to nearest model first, one at a time
when that model is destroyed move to the next nearest
if a model is immobilised the rest can abandon it. The immobilised vehicle is then an indiviidual model (cool)
if a model is stunned it can't be abandoned

A flyer that zooms has a combat speed of 18 and a crusing speed of 36. a zooming flyer can never voluntarily move less than 18

railgun is the same

Units don't get cover anymore. Individual models roll for their individual cover save

rend has no change, although it is clarified as a to wound roll of 6 is AP2 and add d3 to strength against vehicles

I think force weapons are the same allbeit the power part is AP3. Activate the weapon with ld test and it causes ID. You will see more GK's activating force weapons, and DTW (Deny the Witch) rolls cannot be taken against them

They are AP-, get armourbane +2d6 Armour Penetration and fleshbane wound on 2+

The focus fire thing allows you to choose which models to hit and that is judged by what individual cover save they get.

If you shoot normally you roll to hit and roll for wounds as normal. You then roll for armour saves and any failed ones represent unsaved wounds, and in multiple wound cases you kill one model and then move to the next model and so on. Your opponent gets to choose which AP wounds are allocated first. characters roll a look out sir of 4+ to pass it on to another model. It seems to me that you allocate wounds to the nearest model first, and as you come across a model which deserves a cover save, you then roll for it. If everyone has armour saves then you simply roll all the armour saves and start taking off models. If there is no armour save then you take off nearest models and roll cover saves for those in cover. Hope that make sense.

And then on page 33, "Assault Vehicle: Passengers disembarking from Access Points on a vehicle with this special rule can charge on the turn they do so, even on a turn that the vehicle was destroyed".

If your vehicle is open topped or an assault vehicle, you can charge.

No change to grenades, other than the ability to throw them. No mention of gk specifically.