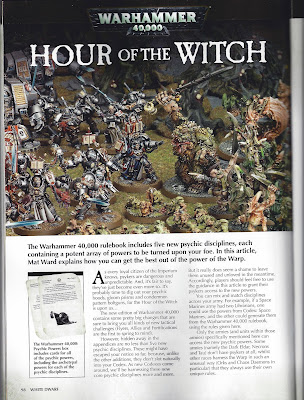 Lets end some of the psychic power confusion. Now you can read it for yourself instead of the he said she said problem we have been having to determine who gets what disciplines and how we get either codex or rule book powers.

Lets start at the top since each army gets its psychic powers a little bit differently depending on how their powers are written in their codices. Powers are exchanged.... codex powers for rulebook ones, with only a single exception.

Blood Angels
Librarians and  Mephiston (assuming lib dreads as well), can exchange their two powers for rulebook to generate powers from biomancy, divination, telepathy, or telekinesis in any combo

Chaos Space Marines
Any model with psychic powers can swap out their powers for the rulebook ones. For each power purchased in the codex, generate powers from pyromancy, telekinesis, or telepathy in any combo.
Typhus generates 2 powers
Ahriman generates  3 powers

Dark Angels
Librarians, including Ezekiel can exchange their codex powers, generate 2 powers from the rulebook chosen from divination, pyromancy, telepathy, or telekinesis in any combo.

Eldar
Farseers including Eldrad may exchange their powers for those in the rulebook for each power he has purchased from the codex, powers are from divination or telepathy.
Eldrad generates 4 new powers.

Grey Knights
A librarian may use the disciplines in the rulebook instead of those in the codex. If so, he generates a number of powers equal to his mastery level from divination, pyromancy, or telekinesis. Hammerhand is not exchanged
Inquisitors can exchange only 1 power, same disciplines as the librarian.
Coteaz  can exchange all his psychic powers for 2 rulebook ones

Imperial Guard
Primairs psyker can exchange his codex powers for 2 from the rulebook, biomancy, pyromancy, telepathy, and telekinesis in any combination.

Space Marines
librarians including Tigurius can use the powers in the rulebook instead of codex powers. They generate 2 powers from biomancy, pyromancy, telepathy, or telekinesis in any combo
Tigurius generates 3 powers

Space Wolves
A rune priest including Njal can use the rulebook powers instead of codex ones. Generate 2 new powers from biomancy, divination  or telekinesis

Tyranids
any model with psychic powers can exchange codex powers for rulebook ones. For each power including those purchased, they generate a new one from biomancy, telekinesis or telepathy

Divination
Prescience - within 12, can reroll
Foreboding - this power is, Counter-attack, full Ballistic, this does not, Overwatch
Forewarning - within 12", a 4+ invulnerable
Endurance from Biomancy listed....
Perfect Timing - have the Ig
Precognition - Hit and To Wound
6. Scrier's Gaze - Scrier's Gaze is a blessing that targets the Psyker. Whilst the power is in effect, you can roll three dice and chose the result you want when rolling for Reserves, Outflank and mysterious terrain.

Telekinesis
Assail - Range 18"
Crush - is a f, Roll 2D6, equal to the, automatically, automatic, of a separate
Gaze of Infinity - 24", Deep Strike
3. Objuration - a single enemy, rolls a 6, squadron)., with the H, for each).
Shockwave - Range 12"
Telekine Dome - within 12", invulnerable, power is in effect, AP equal
6. Vortex of Doom - is a witchfire power with the following profile: Range 12" S10 AP1 Heavy 1, Blast* If, when using this power, the Psyker fails his Psyhick test, centre the Vortex of Doom blast marker on the Psyker - in this case, the template does not scatter.

Telepathy
Psyhic Shriek - Roll 3D6, unit suffers, Armour and, caused by
Dominte - within 24", must pass a, shoot, Run, action is fo
Mental Fort(ification) - unit within, regroups
Puppet Master - of 24", as if it was, the Psyker, players control
Terrify - is a malediction, unit within, the Fearless, having the, Furthermore
Invisibility - within 24", Stealth special, gain no benefit, don't see it, Skill 1
6. Hallucination - is a malediction that targets a single enemy unit within 24". Roll immediately to determine the manner of hallucinations the target is suffering from (roll once for the whole unit).

D6 Result
1-2 Bugs! I Hate Bugs! Something unspeakable has gotten under the victims armour and has begun to crawl around. The unit is automatically Pinned, unless it would normally automatically pass Pinning tests or is locked in close combat, in which case there is no effect.

3-4 Ermmm? All sense of urgency is lost, and the befuddled warrior just stare listlessly into space. The unit cannot shoot, Run, declare charges or strike blows in close combat whilst the power is in effect.

5-6 You! You're a Traitor! Paranoia set in and the panicked warriors lash out at thei comrades. Every model in the unit immediately inflicts a single hit on his own unit, resolved at that model's own Strengths, but using the Strength bonuses, AP values and special rules of their most powerful close combat weapons (if they have any). 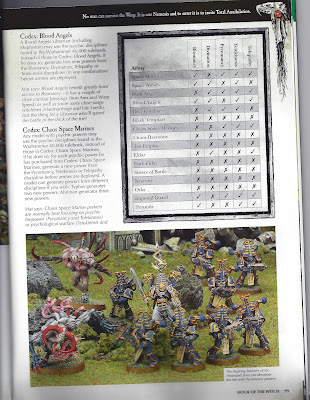 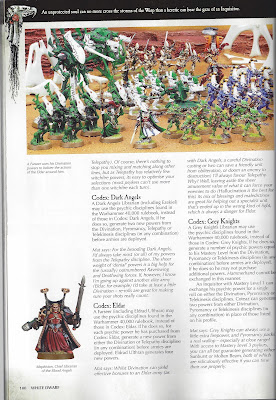 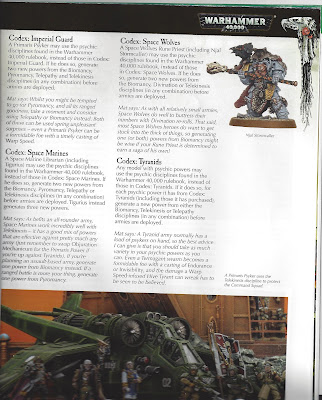