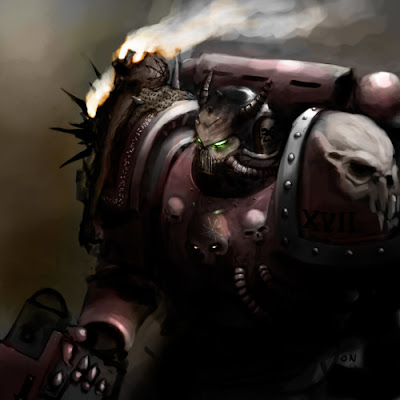 This morning I have a Faeit 212 exclusive set of information for Chaos Space Marines. Yes, I said Chaos Space Marines, as I have been told directly the title is not Chaos Legions. Regardless of hurt feelings for no legions, there is a lot here for insight into 6th edition, with the names of some USR's and special rules found in the Chaos Space Marine codex.

Please remember that even solid rumors like this set are still rumors, all the way up until we get the codex in hand. Its very cool to get the names of some of these USR's, even though Grant doesn't precisely know what they do. So if someone else knows more about these special rules, please by all means lets get the conversation going.

via Grant on Codex Space Marines
*The book is called chaos space marines.
*There are no legions.
*I don't know if I mentioned it before but the "random terrain" is officially called "mysterious terrain"

*Also the anti psyker stuff in the book is a special rule called "suffer the witch". Every unit can negate a power on a 6 up but it can be buffed....yeah...can you say GK nerf?

*One is called ecstasy...which sounds weird but basically it allows the user to fire his weapon at his strength value. I can't remember what unit has it though!

*Some usr names in the codex are "strike down", "blind", and "un-weilding". Not sure what they do.

*There is a usr called "invisibility" that seems to have an affect on targeting a the unit and also effects assault.